Jammu and Kashmir beat Manipur by eight wickets in Vijayawada.

Jammu and Kashmir have finished their Syed Mushtaq Ali Trophy 2019 campaign on a winning note beating Manipur by eight wickets in Vijayawada on Thursday.

A maiden T20 century from Mayank Raghav had fired Manipur to a challenging 182/6 after J&K opted to field. However, fifties from Jatin Wadhwan (59) and Bandeep Singh (59*) were enough for J&K to overhaul the target in 17.1 overs.

Manipur’s top-order put up a solid account of themselves, led by Raghav who scored 103 off 66 with 11 fours and five sixes. Together with Prafullomani Singh, he led an excellent start, adding 56 runs in 5.2 overs before being separated.

Waseem Raza gave J&K the first breakthrough by shattering the stumps of Prafullomani (3). That gave way to a century stand between Raghav and veteran Yashpal Singh (51). Yashpal stroked his way to a 34-ball 51, an innings that featured seven fours.

The duo took the score to 156 when Bandeep Singh struck with the scalp of Yashpal. Raiskh Salam struck twice in the final over that included the wicket of centurion Raghav to finish with figures of 3/38.

J&K openers also led a solid start with a 70-run partnership that broke in the eighth over when Mayank Raghav had Shubham Khajuria caught for 34.

Jatin Wadhwan scored 59 off 29 with eight fours and two sixes before departing in the 10th over. From thereon, J&K didn’t lose another wicket as the duo of Bandeep and Shubham Pundir added an unbeaten 88 runs for the third wicket taking their team to 184/2 and thus close the season with a third win. 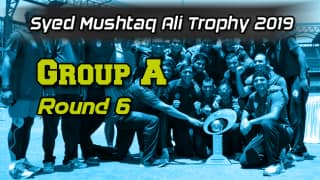