Lomror scored an unbeaten 78 off 52 balls to help Rajasthan post 181/4, before India internationals Khaleel and Chahar bundled out Tamil Nadu for 128

After being put in to bat by TN skipper Ravichandran Ashwin, Rajasthan were in all sports of trouble at 7/2 with Manender Singh and veteran Robin Bist walking back to the pavilion inside the first two overs. While Singh was removed by Washington Sundar for 1, Bist failed to open his account and was cleaned up by Abhishek Tanwar for a three-ball duck.

Murugan Ashwin then removed the other opener Aditya Garhwal for 30 as Rajasthan slumped to 49/3 in 7.2 overs. However, Rajasthan skipper Lomror and wicketkeeper batsman Chetan Bist added 51 runs for the fourth wicket in quick time, before Murugan Ashwin got rid of Bist for 28.

While R Ashwin was the most economical bowler for TN, he went wicketless. Murugan Ashwin claimed 2/33 while Sundar and Tanwar grabbed one wicket each.

In reply, seven TN batsman reached the double-figure marks, but none of them failed to build on their starts. M Shahrukh Khan top-scored with 23 at the top of the order, while Rajendran Vivek made 17 and R Ashwin scored 16. India internationals Khaleel and Chahar claimed claimed six wickets between them, while Ravi Bishnoi took 2/20. 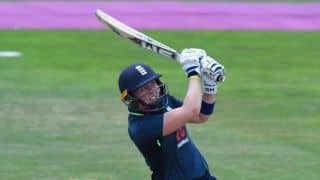