Saurashtra registered a comfortable eight-wicket win over Punjab with captain Jaydev Unadkat leading the way with 3/30.

Saurashtra registered a comfortable eight-wicket win over Punjab with captain Jaydev Unadkat leading the way with 3/30 and the experienced Robin Uthappa starring with a half-century. In a third round match from Group 3 on Sunday in Indore, Saurashtra chased down Punjab s 122 in the 18th over and registered their second win of the tournament.

Punjab s batting was abysmal with no batsman barring Yuvraj Singh and Gurkeerat Singh Mann managing to put up a substantial score. Shubman Gill scored a run-a-ball 12 and looked confident before becoming the third Punjab wicket to fall at 49. Yuvraj hit five boundaries to score 34 off 31 before he was castled by Jay Chauhan.

Unadkat removed Mandeep Singh for a duck and Prabhsimran Singh with Punjab struggling to get going. Gurkeerat, who was kept on his toes, but picked up five boundaries to reach 29 but he too failed to cash in on the start and became Chetan Sakariya s first wicket. Towards the end, Barinder Sran and Manpreet Gony took Punjab over the 120-run margin before Unadkat and Sakariya returned to clean up the tail.

Saurashtra lost Harvik Desai with just 18 on the board, before Uthappa and Cheteshwar Pujara powered their chase with a 97-run partnership for the second wicket. Uthappa s 54 off 44 balls comprised three fours and three sixes each while Pujara remained unbeaten on 42 off 48, his knock studded with six fours. Uthappa eventually departed to Mandeep and Pujara and Prerak Mankad took Saurashtra over the line without much sweat. 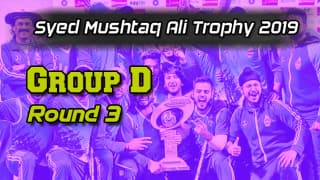 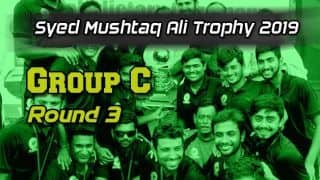