Saurashtra beat Goa by five wickets to end their Syed Mushtaq Ali Trophy 2019 campaign with a win in Indore on Saturday.

Saurashtra beat Goa by five wickets to end their Syed Mushtaq Ali Trophy 2019 campaign with a win in Indore on Saturday.

Saurashtra captain Jaydev Unadkat struck in his first over when he had his opposite number Amogh Desai out for a 9-ball 10.

Goa lost another wicket in quick succession with Chauhan removing Amit Verma for a first-ball duck. Vaibhav Govekar and Keenan Vaz repaired the early damage with a 44-run stand for the third wicket.

Govekar struck seven fours in his 19-ball 32 and became Chauhan’s second victim. His dismissal gave way to a slide which Goa failed to arrest.

While Chauhan was the pick of the bowlers, Aarpit Vasavda (2/9), Dharmendrasinh Jadeja (2/18) and Unadkat (2/22) also chipped in with a couple of wickets each.

Only two of their batsmen registered scores in double-digits with Govekar top-scoring with 32 followed by Keenan Vaz’s 30 off 29.

In reply, Saurashtra wobbled in the beginning losing three wickets inside Powerplay overs. Opener Harvik Desai was bowled off the very first delivery by Darshan Misal (2/25) while Cheteshwar Pujara managed 10 before falling to Amulya Pandrekar (2/29).

Robin Uthappa began in blazing fashion hitting four fours off the first eight deliveries faced but became Misal’s second victim in the fifth over, departing for 18 off 9.

Sheldon Jackson and Prerak Mankad stabilised the innings, adding 28 runs to take them to 65/3 before being separated.

Jackson scored 36 off 32 with three fours and a six but fell with his team five runs shy of the target which they eventually achieved in the 18th over. 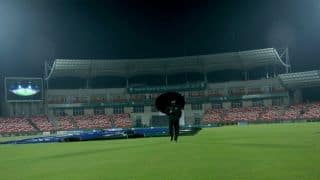 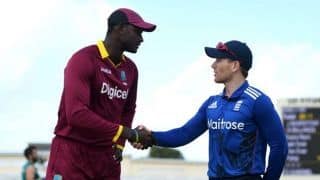