Mizoram‘s winless run in their maiden Syed Mushtaq Ali Trophy season continued after Haryana beat them by 39 runs in Cuttack on Wednesday.

After starting their campaign with two straight wins, Haryana suffered setbacks, succumbing to back-to-back defeats. They returned to winning ways thanks to an unbeaten maiden T20 century from opener Guntashveer Singh.

Guntashveer’s unbeaten 54-ball 100 powered Haryana to a huge 205/2, an innings that was laced with five fours and seven sixes.

In reply, Mizoram put up an improved show but it wasn’t enough for them to avoid a fifth consecutive defeat. Captain and opener Taruwar Kohli (63) and partner Akhil Rajput (59) struck fifties apiece. They added 78 runs in 10 overs before being separated.

However, they failed to keep pace with the mounting asking rate and Rahul Tewatia put paid to their faint hopes with a double-wicket over in which he removed Kohli and Sinan Abdul Khadir (1). Mizoram finally finished at 166/5.

After opting to bat, Haryana openers, led by Himanshu Rana, were off to solid start. Rana struck three fours and a six to move to 25 before falling to Lalnunkima Varte in the fourth over.

Chaitanya Bishnoi joined Guntashveer and together they took the innings further. However, batting on 33, Bishnoi had to retired hurt.

His departure only made things worse for the Mizoram bowlers with Sumit Kumar blasting 41 off 19 with the help of two fours and three sixes. Sumit departed off the penultimate delivery with Guntashveer carrying his bat. 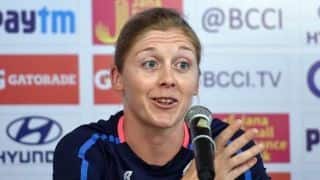