Karnataka put up an all-round display against Bengal in their second round-clash of the Syed Mushtaq Ali Trophy.

Karnataka put up an all-round display against Bengal in their second round-clash of the Syed Mushtaq Ali Trophy 2019 on Friday. Openers Rohan Kadam and BR Sharath struck half-centuries in chase of 132 at the DRIEMS Ground in Cuttack to seal a nine-wicket win.

Bengal, who crushed Mizoram by 159 runs on Thursday, were bowled out for 131 in 19.4 overs after opting to bat first. Abhimanyu Mithun returned top bowling figures of 3/22 while Vinay Kumar (2/18) and Manoj Bhandage (2/18) chipped in with a couple of wickets each.

Bengal were off to a decent start with openers adding 37 before Mithun struck with the scalp of Vivek Singh (7) in the fifth over. From there on, they were kept on tne backfoot with Karnataka bowlers regularly.

Abhimanyu Easwaran scored 16 before becoming Bhandage’s first victim of the innings. Sreevats Goswami was batted solidly for his 40 runs before also falling to Bhandage off the final delivery of eighth over.

They had taken the total to 118/4 when Mithun struck with the scalp of Ritwik which triggered a collapse. Bengal lost their last six wickets for the addition of just 13 runs. Tiwary was their top-scorer with 36 off 37.

Unlike Bengal, Karnataka batsmen made merry with Kadam hitting an unbeaten 81 off 55 with 10 fours and two sixes. Sharath scored 50 off 37 with nine fours before becoming the only wicket to fall in the chase. Karnataka overhauled the chase, making 134/1 with 25 deliveries to spare. 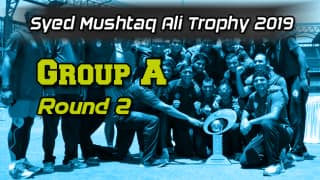