After the bowlers, led by Ankit Rajpoot (3/31), restricted Hyderabad to 139/7, UP s top three fired as they overhauled the target with nine balls remaining.

India international Suresh Raina scored an unbeaten 54 off 35 balls to lead Uttar Pradesh to a six-wicket win over Hyderabad in Round 2 of the Syed Mushtaq Ali Trophy 2019 Group E match at the Palam B Stadium, New Delhi on Friday.

After the bowlers, led by Ankit Rajpoot (3/31), restricted Hyderabad to 139/7, UP s top three fired as they overhauled the target with nine balls remaining.

In chase, Upendra Yadav and Samarth Singh addec 58 runs for the opening wicket in 7.2 overs to lay a solid foundation. Ashish Reddy struck for Hyderabad with the wicket of Yadav for 25 while Samarth departed after scoring run-a-ball 36 in the 13th over bowled by Palakodeti Sairam.

UP stuttered in the middle overs losing skipper Aksdeep Nath and Rinku Singh with the score at 97, but Raina and youngster Priyam Garg put on an unbeaten 46-run stand for the fifth wicket to lead their team home.

Raina hit four fours and three sixes during his knock while Garg found the ropes twice, hit one four and a six.

Earlier, after opting to bat first, Hyderabad lost opener Tanmay Agarwal to Rajpoot in the three over for 16 while Yash Dayal removed Akshath Reddy for nine. Ashish and Bavanaka Sandeep then added 42 runs for the second wicket before Ashish was removed by Nath. Nath struck again getting rid of Sandeep for 33, while India international Ambati Rayudu made 29 off 31 balls, before walking back to the pavilion. 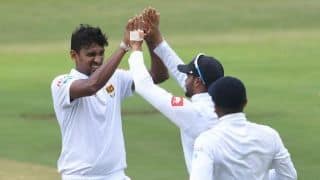