Baroda picked up four points after beating Hyderabad by four wickets in their third match of the Syed Mushtaq Ali trophy.

Baroda picked up four points after beating Hyderabad by four wickets in their third match of the Syed Mushtaq Ali trophy on Sunday. Rishi Arothe picked up four wickets to limit Hyderabad to 131 for 7, after which Baroda chased down the target in the final over with significant contributions from the middle-lower order.

Arothe and his new-ball partner Atit Sheth removed Hyderabad s openers for 32 before Akshath Reddy and Bavanaka Sandeep forged a 48-run partnership for the fourth wicket. Arothe and Sheth struck in quick succession to send back both batsmen with Reddy missing out on his half-century by four runs. Akash Bhandari s wicket was scalped by Lukman Meriwala, which was the last Hyderabad wicket to fall.

In reply, Baroda lost their openers captain Kedar Devdhar and Mohit Mongia cheaply and the rescue work was left to Vishnu Solanki and Deepak Hooda, who together added 52 crucial runs for the third wicket. The partnership was snapped by a terrific piece of run out by Amit Bhandari, sending back Hooda giving Hyderabad a much-needed breakthrough with the wicket of Solanki.

Bhandari also scalped the key wicket of Yusuf Pathan for a duck and at 72/4, Hyderabad seemed to have had an opening, but Swapnil Singh struck a timely 36 off 29 balls with four boundaries and one six and was involved in a 47-run association to bring Baroda close to victory. Chama Milind dismissed Solanki but Swapnil remained not out till the end to guide Baroda home. 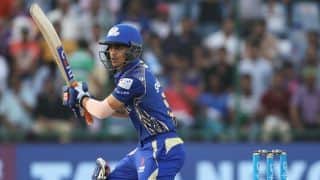