Rain in the national capital put an end to Services hopes of progressing to the Super League stage of Syed Mushtaq Ali Trophy.

Rain in the national capital put an end to Services hopes of progressing to the Super League stage of Syed Mushtaq Ali Trophy 2019 on Saturday.

Overcast conditions and rain resulted in their final Group E fixture against Puducherry at the Palam B Stadium in Delhi being called off midway.

After being sent in to bat, Services openers made a cautious but solid start under cloud cover. The pair of Nakul Verma and Ravi Chauhan added 58 runs before being separated.

Puducherry had to wait till the 8th over before getting their first wicket when Satish Jangir bowled Nakul for 31, an innings that featured four fours.

Jangir added another scalp to his kitty in his next over when he removed the other opener Ravi in the 10th over to leave Services at 58/2.

Captain Rajat Paliwal (5*) and Vikas Hathwala (6*) were leading the recovery from the twin blows when bad light stopped play with Services 67/2 in 11 overs. The match eventually was called off and the two teams were awarded two points each. Services finished third with 18 points while Puducherry ended at the sixth spot with six points.

Uttar Pradesh, who topped the group, and Maharashtra qualified for the next stage from Group E while Tripura ended with the wooden spoon. 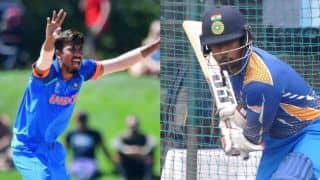