Only 4.5 overs of play was possible in which Hyderabad, batting first, scored 57 for 2.

Uttarakhand needed to win their match against Hyderabad to remain in contention but their hopes were doused when rain washed out their Group E, Round 7 match at the Palam B Ground on Saturday. Only 4.5 overs of play was possible in which Hyderabad, batting first, scored 57 runs for the loss of two wickets before play was interrupted.

In the little play that took place, Tilak Verma put on a show scoring 40 of the team s total with two fours and four sixes off just 25 balls. The two wickets that fell were that wicketkeeper batsmen Jamalpur Mallikarjun and Kolla Sumanth to Mayank Mishra and Gaurav Singh respectively.

While Hyderabad having won one of their previous six games had no chance to qualify, Uttarakhand were still in with an outside chance. With 16 points from six games before today, Hyderabad needed a win to tie Uttar Pradesh at 20 points, although they were way behind in the run-rate. But a washout meant that Uttarakhand could only gain two more points, this finishing with 18 points from seven matches. 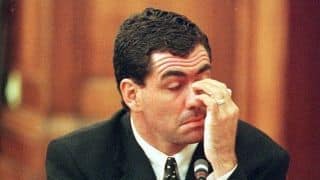