Jharkhand claimed their fourth win in as many games in the Syed Mushtaq Ali Trophy 2019 Round 5 match against Nagaland to consolidate their top spot in Group A with a 54-run win at the Chukkapalli Pitchaiah Cricket Ground, Mulapadu on Wednesday.

Opting to bat first, Jharkhand lost opener Anand Singh early for 14 to Pawan Suyal before in-form batsman and skipper Ishan Kishan got together with Virat Singh for a stand of 42 runs for the second wicket. However, in the partnership Virat contributed only nine before falling to Tahmeed Rahman in the 10th over. Kishan fell to overs later to Imlawati Lemtur, but not before registering his third 50 plus score of the tournament, making 52 off 39 balls.

Kumar Deobrat and Ankul Roy then plundered 111 runs in just 9.2 overs to power Jharkhand to 197/3. Deobrat made 69 not out off 32 balls hitting five fours and a six at a strike-rate of 215.62 while former India under-19 allrounder Roy hit 47 not out off 23 balls with the help of four fours and three sixes.

In reply, Nagaland made their highest T20 score of 143, for the loss of three in their 20 overs to crash to their fourth straight defeat.

Openers Abhishek Kaushik and Sedezhalie Rupero got Nagaland off to a steady start scoring 55 runs for the opening wicket in the 7.3 overs, before Kaushik departed for 31 off 24 balls to Roy. Skipper Rongsen Jonathan tried to up the ante with a 33-ball 47-run knock before falling to Utkarsh Singh. Rupero went about in a slow manner and despite playing 58 deliveries, could only manage 38 and was dismissed in the 18th over. Paras Sehrawat made an unbeaten 22 off 10 balls. 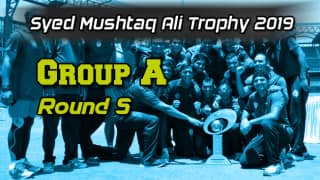