Chasing a modest target of 103, Tripura cantered home for the loss of two wickets and three overs to spare with Udiyan Bose scoring an unbeaten 72 off 54 balls

Tripura got off the mark in Syed Mushtaq Ali Trophy 2019 with an eight-wicket win over Puducherry in their Group E match of Round 6 at the Palam A Stadium, New Delhi on Thursday. (ALSO READ: Kerala thump Nagaland by 10 wickets)

Chasing a modest target of 103, Tripura cantered home for the loss of two wickets and three overs to spare with Udiyan Bose scoring an unbeaten 72 off 54 balls, after the Rana Dutta-led bowling attack had restricted Puducherry to 102/9. (ALSO READ: Jammu and Kashmir end campaign on a winning note)

After being put in to bat, Puducherry were are a healthy position of 70/1 in 11.4 overs despite the early of Thalaivan Sargunam. Skipper and opener Damodaren Rohit and outstation player Paras Dogra had put on 46 runs for the second wicket. (ALSO READ: Uttar Pradesh maintain top spot with 118-run win over Uttarakhand)

But Dogra s wicket for 18, taken by Sanjay Majumdar derailed Puducherry as hey lost eight wickets for just 32 runs. Rohit scored 54 off 57 before falling to Dutta.

Apart from the skipper and Dogra none of batsmen managed to registered a double-figure score, with Dutta finishing with 4/20 in his four overs. Manishankar Murasingh claimed 2/12 in his four while Majumdar picked 2/22 in his four.

In reply, Tripura lost Samrat Singha to Pratik Sargade for just two before Bose and Nirupam Sen Chowdhary added 55 runs for the second wicket. Chowdhary was removed by Sargade for 24, but Bose and Pratyush Singh took their team home in the 17th over. During his knock Bose hit seven fours and two sixes. 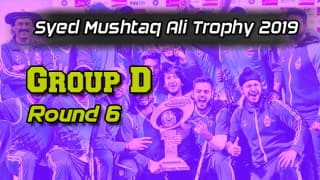