With this win, their third in three games, Karnataka went to of Group D, while Mizoram endured their third straight loss.

Riding on opener Rohan Kadam’s 51-ball 78 and Karun Nair’s 33-ball 71, Karnataka piled on 242/4 in their Group D match of the Syed Mushtaq Ali Trophy 2019, before restricting Mizoram to 105/6, thus registering a big 137-run win at the DRIEMS Ground, Tangi, Cuttack on Monday.

With this win, their third in three games, Karnataka went to of Group D, while Mizoram endured their third straight loss.

After opting to bat first, Karnataka openers, Mayank Agarwal and Kadam added 52 runs for the opening wicket in just 4.2 overs before Agarwal was caught and bowled for 20 by Sina Khadir.

Kadam then joined forces with Nair to added 128 runs for the second wicket in just 11.3 overs. Kadam departed in the 16th over to Lalhruai Ralte after six fours and three sixes. Nair departed in the same over after hitting five fours and five sixes.

Manish Pandey 33 not out off 13 balls and Jagadeesha Suchith’s unbeaten 8-ball 26-run knock them powered Karnataka to the tournament’s third highest score this season.

In reply, Mizoram openers Taruwar Kohli and Akhil Rajput made 63 runs in 8.4 overs before Kohli was run out for 36 off 23 balls by Shreyas Gopal. Gopal then Khadir (0), K Vanlalruata (4), Rajput for 41 off 42 balls and Ralte (3) in quick time to dent Mizoram. 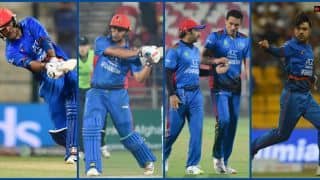 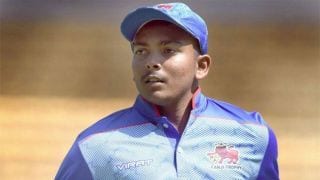