After opting to bat first, Arunachal were skittled out for just 75 before Odisha knocked off the runs in 13.1 overs.

Odisha claimed their second win four matches in Group D of the Syed Mushtaq Ali Trophy 2019 with an eight-wicket win over Arunachal Pradesh at the Barabati Stadium, Cuttack on Monday. (ALSO READ: Tamil Nadu pip Gujarat by one run in last-over thriller)

After opting to bat first, Arunachal were skittled out for just 75 before Odisha knocked off the runs in 13.1 overs. For Arunachal only Techi Doria and Kshitiz Sharma managed to register double-figure scores. Doria made 26 off 37 while Sharma scored 11 off 15 balls. (ALSO READ: Chhattisgarh win high-scoring thriller against Haryana)

For Odisha, pacer Debabrata Pradhan claimed 3/10 in his 3.4 overs while Rajesh Mohanty returned 2/17 and Biplab Samantray took 2/6 in his two overs.

Opting to bat first, Arunachal lost opener Samarth Seth for five to Mohanty followed by the wicket of Akhilesh Sahani for eight by Pradhan. From 44/2, Arunachal lost their last eight wickets for just 31 runs.

In reply, Odisha were jolted early with the wickets of the openers Anurag Sarangi (1) and Rajesh Dhuper (5), inside the first four overs, but Abhishek Raut and Sandeep Pattnaik put on an unbeaten stand of 65 runs to take their team home.

Raut remained unbeaten on 41 off 43 balls while Pattnaik scored 28 not out odd 23 balls. 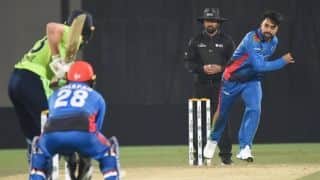