Uttarakhand continued their good run in the Syed Mushtaq Ali Trophy 2019 registering their third straight win in their Group E match against Tripura at the Palam A Stadium, New Delhi on Monday.

Tripura were all out for 110 with only Nirupam Sen Chowdhary (34) and Manisankar Murasingh (33) adding anything substantial to the total. For Uttarakhand, left-arm spinner Rohit Dangwal claimed 3/16 while pacer Sunny Rana grabbed 2/14. Skipper Rajat Bhatia chipped in with 3/29 while Girish Rauturi returned 1/3 in his one over.

After being put in to bat, Uttarakhand lost Bhatia for ten to Sanjay Majumdar and Saurabh Rawat for eight to Kamal Das. But Kaushal and Panwar added 59 runs for the third wicket to revive Uttarakhand innings. Kaushal was cleaned up by Majumdar in 14th over while Vijay Sharma was run out by Murasingh for 14. Panwar remained unbeaten to take Uttarakhand to 147/5 in their 20 overs.

In reply, Tripura were reduced to 28/4 in the eighth over, with Majumdar (4) and Pratyush Singh (1) falling to Dangwal, while Udiyan Bose was scalped by Sunny Kashyap for 8. Bhatia added his first victim in the form of Tushar Saha for six.

Murasingh and Chowdhary then added 56 runs for the fifth wicket, before Dangwal broke the partnership, removing Murasingh. Rana then polished off the tail removing Kaushal Acharjee (7) and Nirupam Sen (9). 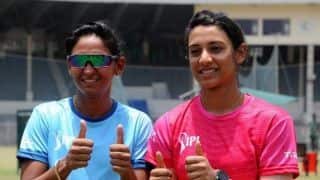