Assam inflicted a punishing nine-wicket loss on Arunachal after they comfortably chased down a 103 in just 6.4 overs.

Assam inflicted a punishing loss on Arunachal after they comfortably chased down a meagre target of 103 with nine wickets remaining. After bundling Arunachal for 102 with Mukhtar Hussain producing thrilling figures of 4 for 8, the Assam top order went berserk, chasing down the total in just 6.4 overs in Round 7 encounter of the Syed Mushtaq Ali Trophy 2019.

Hussain ran through Arunachal s batting line-up which barring Samarth Seth and Kshitiz Sharma failed to show resistance. Seth and Sharma added 44 runs for the second wicket, but once the partnership was snapped, Arunachal s batting imploded, with their final eight wickets falling for just 39 runs. Skipper Amit Sinha took care of the tail to finish with 2 for 18, along with Riyan Parag, Rajjakuddin Ahmed and Jitumoni Kalita picking up a wicket each.

Assam, needing to knock off these runs in order to qualify for the Super League, were off the blocks with openers Pallavkumar Das and Rishav Das adding 73 runs off just 5.2 overs. Rishav struck seven boundaries to score 39 off 18 before he was dismissed by Somnath, the only wicket to fall in the innings. Pallavkumar scored four boundaries and two sixes but it was Rajjakuddin who took the skin of Anurachal s bowlers hammering an unbeaten 30 off just seven deliveries with four boundaries and two sixes.

However, despite the win, it wasn t enough for Assam. 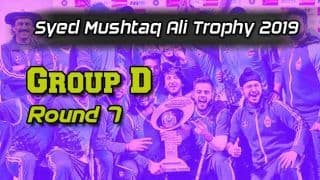