Bowlers led Karnataka to a second straight win in the Super League stage of the Syed Mushtaq Ali Trophy 2019.

Bowlers led Karnataka to a second straight win in the Super League stage of the Syed Mushtaq Ali Trophy 2019 against Uttar Pradesh in Indore on Saturday.

Chasing 150, UP were cruising along nicely before suffering a collapse that eventually saw them finishing on 139/8. V Koushik (3/22) led a superb bowling effort with Jagadeesha Suchith and R Vinay Kumar chipping in with two wickets each as Karnataka took four points to take the top spot in Group B.

UP opted to field and Yash Dayal struck in his first over, innings’ second, to give his side an early success accounting for opener Sharath BR for a four-ball duck. Mayank Agarwal and Rohan Kadam led the early recovery with a 60-run partnership for the second wicket.

Saurabh Kumar took a return catch to end Kadam’s innings on 35 which was laced with four fours and a six. Agarwal also departed soon holing out to Ankit Rajpoot off Ankit Chaudhary. He scored 33 off 27 with the help of four fours.

Karun Nair also got the start, scoring 22, before being run out off the final delivery of 14th over leaving Karnataka at 96/4. Captain Manish Pandey and Manoj Bhandage played handy innings to push their team to a respectable total.

UP got the start with the openers adding 31 runs before Samarth Singh was sent by Prasidh Krishna for run-a-ball 15. Captain Akshdeep Nath and Upendra Yadav played solidly adding 60 runs with the score progressing to 91/1 before they frittered away the advantage.

Jagadeesha Suchith struck twice in the 14th over to trigger the slide getting rid of Akshdeep on 46 and Rinku Singh for a duck. Priyam Garg joined Upendra to put the chase back on track but fell in the 18th over, becoming Koushik’s first victim.

Vinay Kuamr then all but ended UP’s slim hopes with the scalp of Upendra on 42 in the 19th over before Koushik struck twice in the final over to ensure victory. 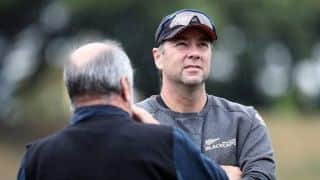