Maharashtra began their Super League stage of the Syed Mushtaq Ali Trophy 2019 with a facile seven-wicket win against Bengal in Indore on Saturday.

Maharashtra began their Super League stage of the Syed Mushtaq Ali Trophy 2019 with a facile seven-wicket win against Bengal in Indore on Saturday.

Bengal huffed and puffed their way to a decent 138/7 after suffering a collapse with Maharashtra opting to field. In reply, they chased down the target in 17.1 overs with captain Rahul Tripathi hitting an unbeaten 60.

Bengal innings had a terrible start with Domnic Muthuswami (3/15) landing early blows as they collapsed to 25/5 in six overs at the Emerald High School Ground. Wriddhiman Saha was bowled by Samad Fallah (1/35) for a two-ball duck in the first over before Muthuswami struck twice in the second over with the scalps of Shreevats Goswami (1) and Abhimanyu Easwaran (0).

Satyajeet Bachhav (2/34) and Divyang Himganekar (1/13) pushed in in a deep hole leaving them gasping for breath. Captain Manoj Tiwary (41) and Shahbaz Ahmed (60*) then arrested the slide adding 55 runs for the sixth wicket.

Tiwary struck three fours and two sixes to bring some stability before Bachhav bowled him in the 15th over.

In reply, Maharashtra started aggressively before opener Ruturaj Gaikwad fell to Akash Deep (2/21) in the third over after hitting four fours in his 11-ball 20.

Tripathi and Rohit Motwani then took over, adding 59 runs for the second wicket before being separated. Motwani was pinned in front by Shahbaz (1/26) on 36 while Naushad Shaikh (2) fell cheaply.

Nikhil Waik hit an unbeaten run-a-ball 18 with three fours to see through the successful chase alongside Tripathi whose innings was studded with nine fours.

Bengal had won their first match of the Group A beating Railways on Friday. 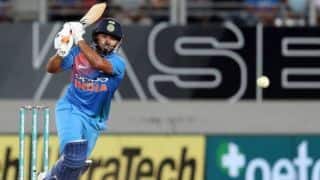 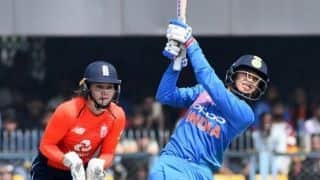