Namibia shocked a Scotland side missing captain Kyle Coetzer to dehydration by 24 runs in Dubai to record their first win of the ICC Men’s T20 World Cup Qualifier. Scotland looked like they were missing their leader, too, as they fell to their second Group A defeat in the tournament to a rejuvenated Namibian side.

Gerhard Erasmus (37) and Craig Williams (31) built a middle order platform for Namibia which JJ Smit used to hit a bruising 22-ball 43 as they posted 159 for six from their 20 overs.

Calum MacLeod (39) and Richie Berrington (23) hit a 48-run stand as Scotland looked well placed on 64 for two at the halfway mark but Jan Frylinck and Christi Viljoen took two wickets each to put the break on a chase that eventually fell flat with the Scots finishing on 135 for eight from 20 overs.

It is Netherlands, though, who continue to set the pace in Group A after they maintained their 100 per cent record with a five-wicket victory over Singapore. Timm van der Gugten and Roelof van der Merwe took three wickets apiece to skittle their opponents for 101 all out in 18.5 overs. Max O’Dowd (35) and Colin Ackermann (34 not out) saw Netherlands through to the target relatively comfortably with 21 balls to spare.

Meanwhile, the sole Group B fixture of the day saw Jersey move up to second with a 35-run win over UAE, Benjamin Ward hitting 47 with the bat while Harrison Carlyon took three for 15 and Ben Stevens three for 20. 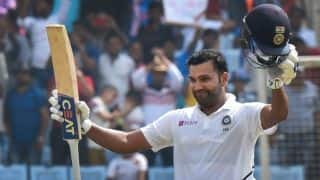