On yet another rain-affected day, Dinesh Karthik sizzled with 95 with Services.

A collective round-up of all the matches from Group C, Round 2 of the Vijay Hazare Trophy 2019.

Dinesh Karthik’s second consecutive half-century coupled with Krishnamoorthy Vignesh’s five-wicket-haul were the highlights as Tamil Nadu registered a thumping 212 run win over Services in Group C, Round 2 match of the 2019-20 Vijay Hazare Trophy.

Batting first, TN endured a top order collapse and were reduced to 55/4 before Hari Nishant and Karthik came together for a 144-run partnership. Nishant scored a half-century but fell to Arjun Sharma having struck the ball at better than a run-a ball. Karthik on the other hand held the innings together and hit 8 fours and a six to take TN to 294/8, although he missed a hundred by five runs.

Services, in response could only muster a lowly 82 with Vignesh shredding the middle and lower order. M Mohammed chipped in with 3/10 with Services losing their final seven wickets for 22 runs.

Tanmay Mishra starred with a century as Tripura beat Madhya Pradesh in a rain-marred game by 104 runs (VJD method) in Jaipur on Wednesday. Mishra’s 102, assisted by Milind Kumar’s 41 odd 39 balls including five boundaries propelled Tripura to 268/8 before their bowlers put MP in trouble.

Naman Ojha was removed for a duck and Ajay Rohera and Yash Dubey were also sent back cheaply. Rajat Patidar and Parth Sahni added 42 runs for the fourth wicket before both departed in quick succession. To add to MP’s woes, there were two run-outs of Rohera and Sahani both affected by Kumar. At 86/6, it started raining relentlessly eventually making no further play possible and Tripura were awarded the win.

Railways were off the mark in the 2019-20 Vijay Hazare Trophy by beating Bihar by 84 runs on the count of VJD method in Jaipur.

On the back of half-centuries from Arindam Ghosh and Vikran Rajput, and crucial contributions from Mangal Mahrour and Ashish Sehrawat, Railways posted 289/6 batting first, in reply to which Bihar were 155/6 before tain interrupted the game and play never resumed.

After Mrunal Devdhar was dismissed first ball of the match, Mahraur and Sehrawat added 90 runs for the second wicket, followed by a 144-run partnership between Ghosh and Rajput. Ghosh missed his century by four runs and was dismissed off the penultimate ball of the innings, doing enough by them to take Railways to a strong total.

Bihar were dealt early blows, their score at one stage reading 48/4 with legspinner Karn Sharma claiming 3/23 in nine overs. Shasheem Rathour held the innings with an unbeaten 86, supported by Sachin Kumar’s 3. Pradeep T, Vikrant Rajput and Harsh Tyagi bagged a wicket each before rain intervened. 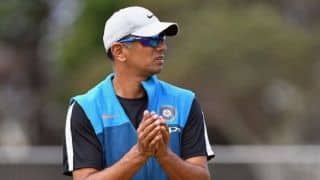