Captain Virat Kohli smashed an unbeaten 61 to steer India to victory with two balls to spare in the third and final Twenty20 against Australia on Sunday, ensuring the series ended all square.

The prolific batsmen lived up to his reputation, coming in when the two openers fell in quick succession after an entertaining 68-run partnership to prevent Australia earning bragging rights ahead of their four Test series starting next month.

The home team won a nail-biting and rain-affected first match in Brisbane by four runs, with the second in Melbourne abandoned due to persistent showers. “I thought overall skill-wise we were better today,” said Kohli.

“When out openers get into the zone they are difficult to stop. There were a few nervous moments in between, but [for me], it’s always easy when the guys at the top do what they do.”

After losing the toss and being told to bowl, India restricted Australia to 164-6, with all-rounder Krunal Pandya taking four wickets and D’Arcy Short top-scoring on 33.

Despite losing, Australian captain Aaron Finch said he was proud of the team. “The way we fought was outstanding,” he said.

“Still fair bit of work to do but we’re going in the right direction which is nice. Feeling good for the Tests.”

Australia were boosted by strike bowler Mitchell Starc being back for his first T20 international in two years, replacing Jason Behrendorff.

He caused opening batsmen Rohit Sharma and Shikhar Dhawan trouble but they took apart Nathan Coulter-Nile at the other end, each cracking a huge six in plundering 29 runs off his first two overs.

Their confidence was soaring and the strokes were majestic as they hammered 22 off Marcus Stoinis’ opening over.

Finch brought Starc back in desperation and he delivered, trapping Dhawan lbw for a highly-entertaining 41 off 22 balls. Adam Zampa then bowled Sharma for 23, giving them a glimmer of hope.

The spin combination of Zampa and Glenn Maxwell stymied the runs and it was game on when KL Rahul fell and Rishabh Pant went first ball, leaving India needing 56 off 36 deliveries.

ALSO READ: Team India backs all players whether they do well or poorly: Krunal Pandya

But Kohli was unstoppable, hitting two sixes and four fours as he guided his side home alongside Dinesh Karthik (not out 22).

Australia’s inconsistent batting has been a concern since the ball-tampering scandal in March. Finch had much to prove, having only managed a top score of 41 in 10 innings across all formats. He crunched a four off Khaleel Ahmed in his first over to signal an attacking intent.

At the other end, Short also looked in good nick and they ran well between the wicket to build a 50 partnership.

Finch was given a second life on 23 when Rohit dropped an easy catch, but he didn’t last much longer, getting a top edge to Pandya off Kuldeep Yadav and he was gone for 28 off 23 balls.

Glenn Maxwell came in and was given out lbw on the third ball he faced, but the decision was overturned on review. On the very next delivery, Short was also given out lbw, this time to Pandya. He too reviewed but lost and his innings was over.

In came Ben McDermott and he tried to sweep Pandya on his first ball and was out lbw for a golden duck, leaving Australia in trouble, losing three wickets for five runs to be 73-3. It halted their momentum and Maxwell was caught off Pandya near the boundary for 13.

The big-hitting Chris Lynn began adding to the scoreboard but indecision from Marcus Stoinis saw him run out for 13 and Australia’s hopes of a bigger score were over. 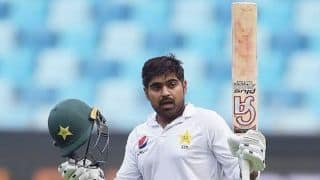