The President s XI batted twice, ending the match on a very odd score of 203/19.

Of the 19 wickets that England s bowlers took on the second day of their tour match against a Cricket West Indies President s XI at Three Ws Oval in Barbados, three came to Stuart Broad in successive deliveries to give the veteran fast bowler a hat-trick.

Broad, 32, claimed the ninth, tenth and eleventh wickets to fall shortly before the tea interval on Wednesday, with the 23-year-old offspinner Bryan Charles his hat-trick victim. After the resumption, Broad added a fourth wickets to finish the innings with figure of 10-6-19-4. His record-setting new-ball partner James Anderson has similarly economical figures of 4/12 in 11 overs, while Sam Curran, Chris Woakes and Moeen Ali each took two wickets. (ALSO READ: Injured Olly Stone out of West Indies Tests)

Joe Root pocketed 3/12 in five overs, while the left-arm spinner Jack Leach was the most expensive England bowler with 65/1 from his 17 overs for one wicket to show for.

The CWI President s XI batted twice, ending the match on a very odd score of 203 for the loss of 19 wickets. Eight batsmen were dismissed twice in the day.

Anderson began the day on a positive note, getting the opener John Campbell – part of West Indies Test squad – in his second over, and then added another as Curran also joined the fun to have the CWI President s XI at 13/4. Leach s extraction of skipper Jahmar Hamilton left the home team five down at lunch. (ALSO READ: Don t underestimate West Indies at home: Stuart Law warns England)

After Woakes and Ali each took a wicket, Broad started the carnage just before tea. Alzarri Joseph and Miguel Cummins were dismissed of the fifth and sixth deliveries of his ninth over and off the first ball of Broad s tenth as the CWI President s XI were bowled out for 128 in 56 overs.

Batting again, they made a further 75 runs for the loss of nine wickets. Charles poked to Ben Stokes at second slip to complete the hat-trick, and Broad s fourth wicket came when Jermaine Blackwood was dismissed for the second time in the day. Anderson took two more wickets and England skipper Root grabbed three wickets in quick time as the match ended in a draw. 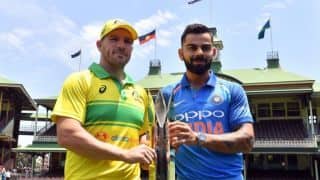