Hundreds to Jason Roy and Joe Root set up a 171-run win over the University of West Indies Vice Chancellor’s XI in Cave Hill on Sunday, giving England a warm-up victory ahead of the first ODI against West Indies this week.

A middle-order collapse followed Roy’s dismissal, with Eoin Morgan run out for 8 and Alex Hales out for 0. Ben Stokes made 23 from 27 balls and Moeen Ali got 24 from 18, and Chris Woakes (22*) and Liam Plunkett (4*) were left not out.

Mark Wood removed opener Kjorn Ottley in the fourth over to give England an early wicket. The skipper Kyle Corbin (35) and Amir Jangoo (35) resisted until both were out stumped by Bairstow off Moeen and Adil Rashid respectively. The highest score of the chase came from Nicholas Kirton who made 37.

Woakes, Wood and Rashid took two wickets each while Plunkett, Moeen and Stokes claimed one each. 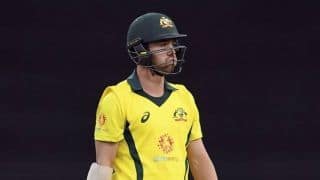