Adil Rashid snared four wickets in five balls as England resisted a determined West Indies effort to claim a 29-run victory in a high-scoring fourth ODI at the National Stadium in Grenada on Wednesday.

Responding to the tourists’ mammoth total of 418/6, the highest ever in an ODI in the Caribbean, the home side were set on course by a rampaging 162 off 97 balls by veteran opener Chris Gayle. (FULL SCORECARD: WEST INDIES vs ENGLAND)

They remained in the hunt until the 48th over when legspinner Rashid, who had taken a fearful hammering in his first four overs, broke an 88-run seventh-wicket partnership between Carlos Brathwaite and Ashley Nurse. (READ: England hit record 24 sixes in 418-6 v West Indies)

He then scythed through the tail – taking the last three wickets in the next four balls – to finish with figures of 5/85 off his allotted ten overs.

Despite Rashid finishing as the match-winner with the last five wickets of the innings, it was fast bowler Mark Wood who prevented the home side from running away with the game as he completed his ten-over spell with excellent figures of four for 60 on a pitch tailormade for batting.

West Indies’ total of 389 was their highest-ever in ODIs but it will be of little consolation given the final capitulation which saw the last four wickets falling at the same score to leave England with an unbeatable 2-1 lead going into the final fixture of the five-match series on Saturday in St Lucia.

Persistent rain prevented a ball being bowled in the scheduled third match, also in Grenada, on Monday.

Setting a target for the first time in the series after West Indies captain Jason Holder won the toss, England underscored the reputation acquired by their batting line-up since the disappointments of the 2015 World Cup in racing to what looked an unassailable total.

Jos Buttler led the way with a rampaging innings of 150 off just 77 balls with 12 sixes and 13 fours while his captain, Eoin Morgan, suffered only by comparison to the wicketkeeper-batsman’s astonishing innings as he reached 103 off 88 deliveries with six sixes and eight fours decorating his innings.

Their fourth-wicket partnership of 204 came in less than 21 overs and followed an excellent comeback innings of 82 by Alex Hales at the top of the order. Having been selected to bat in the middle order for the abandoned third match, he replaced the injured Jason Roy as opener and made full use of the opportunity in ideal batting conditions, putting on exactly 100 with Jonny Bairstow for the first wicket.

“We were fortunate with that spell from Adil to get us over the line,” said a relieved Morgan at the end of the match. “I thought the West Indies played so well and gave it their all. A lot people talk of them being (rated) number nine in the world, but there’s not a huge difference between the two teams.”

Just a week after the West Indies posted a new record tally of 23 sixes for an ODI innings, England surpassed that number by one, Buttler thrashing Brathwaite for another huge hit over deep midwicket before the big all-rounder bowled him with the next delivery in the final over of the innings.

England bludgeoned 154 runs off the final ten overs with Buttler accounting for 105 of those in a withering display of power-hitting.

Gayle’s effort in response, which included 14 sixes and 11 fours, was remarkable given the 39-year-old left-hander’s relative lack of mobility.

Supported by 61 from Darren Bravo in a 176-run third-wicket partnership, the former captain looked in the mood to take the home side to a sensational victory until he was bowled heaving at Ben Stokes in the 35th over. When Holder departed at 301 for six, West Indies chances appeared extinguished.

However Brathwaite, who registered a maiden ODI fifty, and Nurse (43) kept up with the required rate in an entertaining stand. It appeared to be a huge gamble for Morgan to persist with Rashid against the two big-hitters but his faith in the spinner paid rich dividends, Nurse miscuing a swing at the bowler at the start of his final over to trigger the final slide.

“We had a real go at it,” said Holder in reflecting on his team’s effort. “We tried to maintain momentum but just couldn’t keep it going to the end. Credit to Chris again though for the way he batted.” 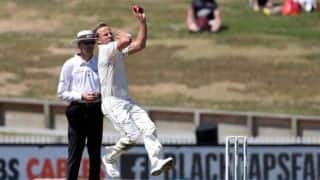 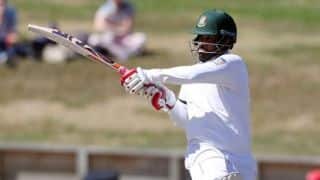