It leaves the series locked at 1-1 going into the fourth match at the same venue on Thursday.

The third one-day international of the five-match series between the West Indies and England was abandoned on Monday after steady rainfall forced the match to be stopped before a ball was bowled in Grenada.

England captain Eoin Morgan put the West Indies to bat but the showers which delayed the toss returned before the players could get on the field at the National Stadium. It leaves the series locked at 1-1 going into the fourth match at the same venue on Thursday.

Both teams will then move on to St Lucia for the final ODI and the first fixture of a three-match T20 International series in the same country, after which the final two T20’s will be played in St Kitts.

On a couple of occasions the conditions improved sufficiently for the umpires to decide on revised regulations for a rain-reduced match, only for the rains to return and remove any chance of playing a minimum 20 overs-per-side match.

As the coin was tossed, the match counts as an official ODI which will be a particular disappointment for Darren Bravo as the West Indies batsman was hoping for a more significant occasion to mark his 100th match in the format. 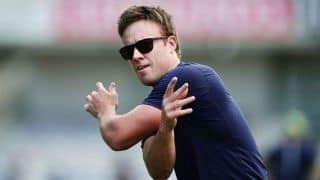