Anya Shrubsole's 4/30 kept the BP XI to 155, which England chased in tense scenes.

England Women warmed up for their series with India Women by taking a narrow two-wicket win over a Women Board’s President XI in Mumbai on Monday, chasing a target of 155 in the 38th over.

Chasing 155, England were reduced to 11/4 but found rallying support from Heather Knight who hit an unbeaten 67 off 86 balls to finish the job.

Smriti Mandhana’s decision to bat at the Wankhede Stadium did not go to plan, with the Board President’s XI bowled out for 154 in 49 overs. Leading the way for England was Anya Shrubsole with 4/30, backed by wickets to Georgia Elwiss (2/20), Sophie Ecclestone, Laura Marsh and Alexandra Hartley.

Mandhana went first in the fourth over, caught behind off Shrubsole who then added Sabbhineni Meghana for 1 in her next over. When Deol was run out in the 13th over and Priya Punia caught and bowled by Elwiss in the next over, the BP XI had slipped to 61/4. Then became 70/5 when Veda Krishnamurthy was lbw to Elwiss.

Mani and Fulmali, both uncapped at international level, offered some resistance before the hosts lost their last three wickets for 21 runs with Shrubsole doing damage.

Another uncapped player, the 27-year-old Komal Zanzad, struck thrice in her first three overs to rock England’s chase. In her opening over she had Tammy Beaumont lbw for 0 and in her second, picked up skipper Sarah Taylor lbw for 2. Between these strikes, Reemalaxmi Ekka – also uncapped – had Amy Jones caught behind for 2.

England lost their fourth when Zanzad bowled Natalie Sciver for 0.

Knight found support from Danielle Wyatt (22 from 49 balls), Elwiss (13 from 12), Shrubsole (23 off 30) and lastly Lauren Winfield (23* off 22) to steer England home. Each of Knight’s lower-order team-mates, barring Katherine Brunt who was lbw for 0 in the 25th over, made a crucial contribution even though the BP XI fought hard.

When Brunt was dismissed the score read 79/7 in the 26th over. Shrubsole and Knight took the score to 118 before the latter was dismissed, after which Winfield stepped up to add 39 to finish a close victory. Knight hit nine fours in her match-winning knock.

The first ODI between India and England is on February 22 in Mumbai. 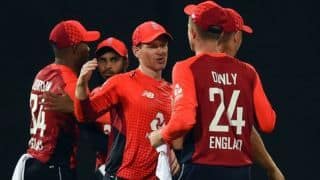