Chasing 106 after Garnder took 3/22, the Southern Stars won in 15.1 overs to beat England at Antigua.

With a flurry of sixes, the allrounder Ashleigh Gardner sealed a fourth Women’s World T20 final title for Australia Women in the company, fittingly, of her captain Meg Lanning as England Women were beaten by eight wickets at the Sir Vivian Richards Stadium in Antigua on Saturday.

Gardner’s offspin had been pivotal in Australia dismissing England for 105 in 19.4 overs – she dismissed the top-scorer Danielle Wyatt, skipper Heather Knight and Anya Shrubsole in four economical overs – and chasing 106, she hit 33 from 26 balls to take the No 1 ranked team in Women’s T20Is to victory in the 16th over.

Lanning’s contribution to the win was an excellent catch to get Wyatt for 43 and a cool unbeaten 28 off 30 balls in a stand of 62 in eight overs with Gardner.

ALSO READ: This is a very satisfying win – Meg Lanning

England opener Wyatt top-scored with a 37-ball 43 after she was dropped by wicketkeeper Alyssa Healy off seamer Ellyse Perry in the third over. Wyatt and her captain Heather Knight (25) were the only notable contributors as Gardner and legspinner Georgia Wareham combined for five wickets to set up the Southern Stars for victory.

Although a succession of opportunities were missed in the field via dropped catches and errant run out attempts, it was the teenager Wareham who shook her team out of their lethargy with a direct hit at the non-striker s end to run out Amy Jones. She then claimed the wickets of Lauren Winfield and Sophia Dunkley off consecutive balls to give her side a firm grip on the match. Gardner accounted for Wyatt and Knight as the wickets tumbled and the 21-year-old then added the scalp of Anya Shrubsole, who fell seeking to clear the midwicket boundary.

Perry, 28, became the first Australian to take 100 T20I wickets, and the second after West Indies Anisa Mohammed, when she won an lbw shout against Natalia Sciver for 4. The milestone came in Perry s 102nd match.

Chasing 106, Australia lost Beth Mooney (14) and the Player of the Tournament Alyssa Healy (22) but Gardner and Lanning took them home with a series of sublime boundaries, with Gardner, 21, striking three sixes in two overs as the target was achieved. 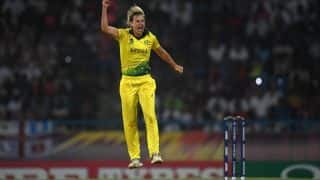