A total of 153/7 was defended tigerishly as New Zealand were bowled out for 120 in 17.3 overs to face elimination.

Australia Women have booked their place in the semi-finals of the 2018 ICC Women’s World Twenty20 after defeating New Zealand Women by 33 runs at Guyana s Providence Stadium on Wednesday.

A total of 153/7 was defended tigerishly in the field, with Megan Schutt leading the way, as New Zealand were bowled out for 120 in 17.3 overs to face elimination.

For the second game in a row, Alyssa Healy scored a fifty in an Australian win to pocket her third successive Player-of-the-Match award. Her 38-ball 53 powered a strong start in the company of Beth Mooney who made 26 off 24 balls, but from 71/1 in the ninth over the innings gave way somewhat as New Zealand rallied in the field. Healy – dropped on 11 by Amelia Kerr – plowed on to a fifty off 22 balls before she was third out at 99 in the 13th over during a period in which Leigh Kasperek pulled things back, but an unbeaten 29 off 18 balls from Rachel Haynes got the total past 150.

Kasperek finished with 3/25 in her four overs, in the process becoming the fastest female cricketer to the landmark of 50 T20I wickets. She needed 29 innings, one fewer than West Indies Anisa Mohammed.

New Zealand s chase began poorly with Schutt trapping Anna Peterson lbw for 0 in the first over and then Elysse Perry bowling Sophie Divine for 0 in the second over. When New Zealand skipper Amy Satterthwaite was given lbw for 2 to Sophie Molineux, the chase was tottering at 13/3.

Suzie Bates (48) and Katen Martin (24) breathed life into the innings but as the run rate escalated, Australia fought hard. Martin was stumped by Healy off Georgia Wareham midway through the 12th over, before Delissa Kimmence removed Maddy Green and Bernadine Bezuidenhout in the 14th over to snuff out the chase. The big wicket of Bates came in the 15th over when Ashleigh Gardner won an lbw shout.

Schutt was the pick of the Australian bowlers with 3/12 in three overs, followed by Molineux with 2/20 in 3.3. 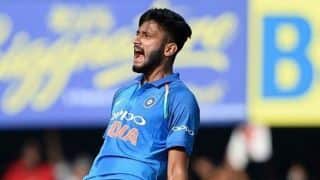