West Indies edged England by four wickets to set-up their semi-final clash with Australia in the ICC Women s World T20. Allrounder Deandra Dottin had an outing to savour as she picked up 2 for 21 and then scored a crucial 46 to help West Indies chase 116 to win.

The win wasn t as straightforward though. West Indies may have been clinical with the ball, but with the bat, they needed a couple of extremely vital contributions Dottin and Shemaine Campbelle and an assured sense of calm from wicketkeeper Kycia Knight. Chasing a modest target, West Indies were in trouble early being reduced to 3 for 2, with opener Hayley Matthews and skipper Stefanie Taylor scoring 1 run between them. Anya Shrubsole, the hat-trick taker from the previous game dismissed both.

The only partnership worth mentioning, that also turned out to be the game changer was the one between Dottin and Campbelle, who added 68 runs off 75 deliveries for the fourth wicket. They batted till the 15th over before Kirstie Gordon provided the breakthrough getting the allrounder for 46 with Dottin have hit one four and four sixes.

Natasha McLean and Britney Cooper fell in quick succession, and with West Indies score reading 90/4 with three overs remaining, England had revived their hopes. The equation boiled down to 26 needed off last three and Campbelle was the key for West Indies and she single-handedly turned the equation in favour of the hosts by taking 12 off that over. A dropped catch didn t help either. Shrubsole returned to remove Campbelle and sent alarm bells within the West Indies set-up and finished with a brilliant spell of 3 for 10, but a first-ball boundary from Knight gave the hosts a crack at Australia on Friday.

In the other semifinal, India will face England.

Earlier, been put into bat, England, from 22/1, slipped to 50 for 6 before a lower-order recovery from Sophia Brown and Shrobsole got them beyond 100. The two combined to add 58 runs with five boundaries and two sixes between them, but both fell in a span of nine deliveries to singnal curtains. 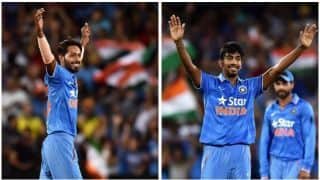 IND A vs NZ A: Shaw, Vijay and Vihari hit fifties on final day of draw