South Africa were sent packing from the ICC Women s World T20 following a seven-wicket loss to England at St Lucia on Friday. Having endured a dramatic collapse in the previous game against West Indies that saw them lose nine wickets for 28 runs, South Africa women produced yet another forgettable batting display getting bowled out for 85, a score that England comfortably chased down with seven wickets remaining.

South Africa s second consecutive score of under a 100 was owed to a hat-trick from Anya Shrubsole, who removed Shabnim Ismail, Masabata Klaas and Yolani Fourie in the last over to take the tournament’s first hat-trick. Her bowling partner Natalie Sciver picked up three wickets herself giving away just four runs as South Africa s batting crumbled against the fast bowling duo.

South Africa skipper Dane van Niekerk opted to bat, but her batters failed to respond well to their captain s call. In a must-win match, South Africa endured a crawling start. Lizelle Lie faced 26 balls to score just 12 before her horrific stay in the middle was ended by Sciver, who bowled an astonishing 20 dot balls. Kristie Gordon and Linsey Smith removed Laura Wolvaardt and Marizanne Kapp cheaply, and at the 10-over mark, South Africa had stumbled to 33 for 4 with the run out of Niekerk.

Kristie and Sciver took care of the middle order before Shrubsole picked up three in three to signal curtains. Only Chloe Tyron, top scorer with 27 and Mignon du Preez showed some resistance with a 25-run stand for the sixth wicket,

England, in their chase, would show no nerves. Danielle Wyatt and Tammy Beaumont added 55 runs for the opening wicket with seven boundaries between the two. Niekerk removed both batters in quick succession but it was just delaying the inevitable. Moseline Daniels cleaned up Sciver cheaply before skipper Heather Knight and Amy Ellen Jones remained unbeaten on 14 each and took England over the line in the 15th over. 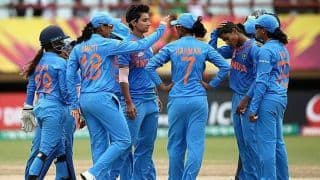