South Africa beat Bangladesh by 30 runs to register their second win of the ICC Women s World T20 and leave the tournament on a high.

South Africa beat Bangladesh by 30 runs to register their second win of the ICC Women s World T20 and leave the tournament on a high. South Africa, who set Bangladesh a target of 110 to win, managed to keep things tight with their bowling, and kept the opposition to 79 for 5 after 20 overs. The loss means that Bangladesh, like Ireland, end the campaign without a win.

For Bangladesh, captain Salma Khatun was the pick of the bowlers with figures of 3 for 20, but despite her effort, England did just about enough to put up a total which, as it turns out, did the job for them. Lizelle Lee raced to 21 off 13 balls with three boundaries before being run out, post which the second-wicket pair of captain Dane van Niekerk and Marizanne Kapp added 35 runs for the second wicket.

Khadija Tul Kubra operated on a tight line and length and was rewarded for her discipline with the wickets of Sune Luus and Chloe Tyron as Bangladesh made short work of South Africa s middle order. Kapp s 19-ball 25, along with small yet effective contributions from Tyron (18 off 15) and Mignon du Preez (14 off 15) ensured South Africa a total in excess of 100.

In reply though, Bangladesh batters never managed to get a move-on. After seven overs, Bangladesh s score read 10/0 as both openers Sharmin Akhter and Ayasha Rahman ate up deliveries. Opening bowlers Kapp and Moseline Daniels bowled three overs each to conceded just 12 runs between them. Having struggled for 21 deliveries for eight runs, Luus put Akhter out of misery. Only Fargana Hoque and Ruman Ahmed put up a resistance with a stand of 27 runs but a steep asking rate was too much for Bangladesh women to overcome.

After the dismissal of Hoque, Rumana and Khatun played out the remaining three and a half-overs to make sure that Bangladesh batted their entire quota of 20 overs. For South Africa, Daniels, van Niekerk, Luus, Klaas and Tumi Sekhukhune took one wicket each. 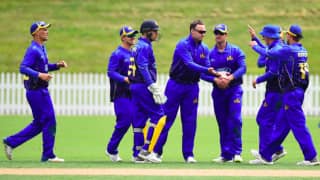