The BCCI fielded a India A women s team consisting of senior players in view of the ICC Women s World T20 next month.

In-form batswoman Smriti Mandhana struck a brisk 40-ball 72 as India A women beat Australia A women by four wickets in the first of the three-match T20 series at the Bandra-Kurla Complex ground in Mumbai on Monday.

Australia A had blanked out India A 3-0 in the ODI series. The BCCI then fielded a full-strength India A women s team consisting of senior players in view of the ICC Women s World T20 that will begin in November at the West Indies. Harmanpreet Kaur was named as captain and Mandhana, her deputy.

Opting to bat, Tahlia McGrath continued her rich vein of form scoring a 23-ball 31 to lay the foundation for the visitors. However, McGrath was caught behind off Deepti Sharma in the sixth over. A 78-run partnership between Naomi Stalenberg (39) and captain Heather Graham (43) followed as Australia ended their first innings at 160/6. For India A, Sharma and Anuja Patil picked two wickets each.

In reply, India A lost opener Jemimah Rodrigues for four as early as the first over after she was cleaned up by Lauren Cheatle, who was on hat-trick after she sent wicketkeeper-batswoman Taniya Bhatia for a duck in the next delivery.

Mandhana and Kaur then stitched a 116-run partnership to stabilise the innings. Mandhana, who was named player of the tournament in the Kia Super League in England, where her 421 runs at a strike-rate of 174.68 took Western Storm to the Finals Day, scored seven boundaries and four sixes.

The partnership was broken in the 13th over with Mandhana departing to McGrath, but the damage was already done. Kaur walked back two overs later to leave Pooja Vastrakar with the responsibility of taking the homeside to the finish line. Vastrakar remained unbeaten on 21 in the company of Sharma (11*) as India A chased down the target with one over to spare.

The second match will be held at the same venue on October 24. 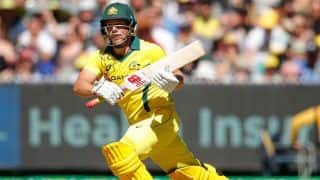 Australia vs UAE, one-off T20I Live Streaming: When and where to watch and follow live