The Kerala Cricket Association (KCA) has issued show-cause notice to its 13 players including Sanju Samson for raising a complaint against captain Sachin Baby.

The Kerala Cricket Association (KCA) has issued show-cause notice to its 13 players including Sanju Samson for raising a complaint against captain Sachin Baby.

According to a report in the Times of India, the board claimed the complaint was based on unsubstantial claims and that it was an attempt to ‘spoil the harmony in the team’.

The players had written a letter to the association casting doubts over Sachin’s leadership ability, accused him of being selfish and arrogant and pleaded for him to be sacked, The Hindu reported on Wednesday.

Following the allegations, a KCA committee conducted preliminary inquiry wherein it asked the players about their grievances. However, the committee established that the complaint was devoid of any basis and was driven by vested interested of some senior players.

“We interviewed all the players and found there was no basis for the alleged complaint, KCA secretary Sreejith V. Nair was quoted as saying by The Hindu. “The players, if they had any grievance, should have reported it to the manager then and there was a proper forum to air their complaints. This is gross indiscipline which cannot be tolerated.”

He further added, “We feel some of the senior players prevailed upon the juniors to sign on the letter. Once we get their response, we will decide on the next future course of action.”

Meanwhile, KCA has issued separate show-cause notice to Samson, Mohd. Azharuddin, Salman Nizar and Akshay KC for going missing from the team hotel without permission during a KSCA tournament in Bengaluru in July. 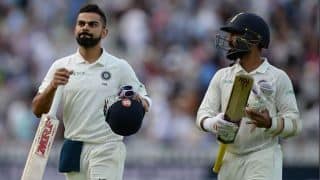