Akash Choudhary, a left-arm medium pacer from Rajasthan, bowled out Pearl Academy (PA) for mere 36, as he claimed 10 for none.

The format T20 might sound interesting and thrilling. However, it is not an easy format to play, both as batsman or the bowler. However, batsmen have the upper hand owing to it’s license for batsmen to go for the runs from the very first ball. Moreover, it is rare that bowlers come up with some match-winning performance to win the tie. However, there is a 15-year old lad form Rajasthan, who has most likely created history by claiming 10 wickets in an entire T20 match, and that too without conceding a single runs. Surely, this is the rarest of rare moments one can ever see in T20 cricket. Akash Choudhary, a left-arm medium pacer from Rajasthan, playing for Disha Cricket Academy (DCA) in the Late Bhawer Singh T20 tournament, bowled out Pearl Academy (PA) for mere 36, while chasing a target of 157. Choudhary later spoke on his heroic performance.

On his match-winning bowling performance

I cannot thank God enough for this. A five-wicket haul in a T20 is possible on a good day, but a 10-wicket haul, without giving away a single run, is all luck. I took two wickets in the first over, another two in the second over, another two in the third over and four wickets in my last over, which included a hat-trick off the last three balls. My elder brother played district-level cricket in Rajasthan and that is the reason I too developed an interest in the game. He would often take me along for this matches,” said Choudhary, as reported by Sportskeeda.

On his early career

My parents then got me enrolled at the Shardul Sports School in Bikaner. In 2014, I shifted to Jaipur to be coached by Mr Vivek Yadav at the Arawalli Cricket Club. Mr Yadav has worked with the Delhi Daredevils and Rajasthan Ranji Trophy team.”

On his idol and other challenges

I am a huge fan of Zaheer Khan s bowling and hope to make it as big as him one day. I tried out for the U16 Challenger Trophy recently. Out of 1300 players, only 150 were selected for medicals, with me being one of them. From among the 150, only 90 players will be selected for the Challenger Trophy and I am hoping to make the cut. The menace of age-fudging still plagues junior level cricket, which is why state associations conduct medical tests on age group players. 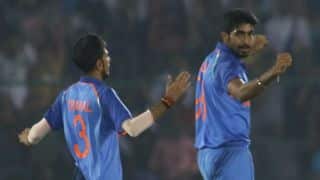 India vs New Zealand: The Kiwis deserve a round of applause