Pradhan was running for a single when he collapsed on the pitch during the match at Kendrapara Autonomous College ground. In an unfortunate incident, an 18-year-old cricketer collapsed and died of a possible cardiac arrest during a local cricket match at a college ground in Odisha’s Kendrapara district on Monday, the police confirmed on Tuesday.

The deceased has been identified as Satyajit Pradhan, a plus-two student of Derabish college near, the report said.

Pradhan was at the non-striker end and was running for a single when he collapsed on the pitch during the match at Kendrapara Autonomous College ground.

He was rushed to the district headquarters hospital where the hospital authorities declared him brought dead.

Pradhan might have died of heart attack, police said, quoting the hospital authorities.

A case of unnatural death has been registered in this connection. Post mortem of the body will be conducted on Tuesday to ascertain the exact cause of the death, police added.

This is not the first instance when such a shocking incident has sent shockwaves in the cricketing fraternity. Last year in March, a young Bengal club cricketer died after collapsing on the field during a friendly match.

The Sonu Yadav represented Ballygunge Sporting Club in Cricket Association in Bengal’s second division league. The incident happened when the 22-year-old was playing a match at the Bata Club ground.

The wicketkeeper-batsman was going back to the tent after finishing his batting and suddenly collapsed. He was quickly rushed to the SSKM hospital where he was declared brought dead. 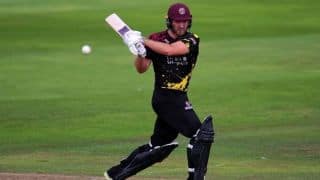