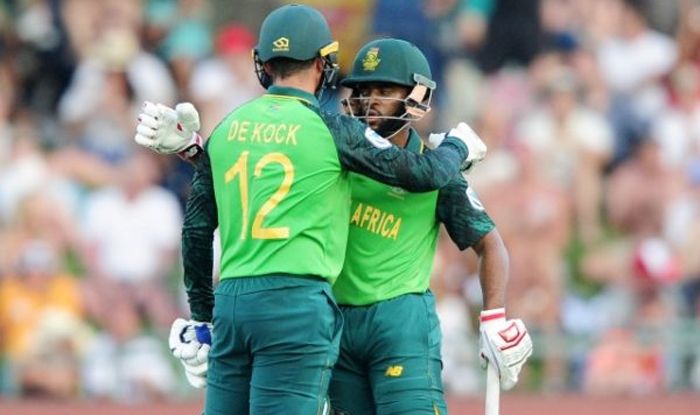 In his first match as South Africa’s full-time captain, Quinton de Kock scored a match-winning century as his side crushed England by seven wickets to go 1-0 up in the series. De Kock’s 15th ODI century was decorated with 11 fours and a six, as chasing England’s 258/8, he and Temba Bavuma added 173 runs for South Africa’s second wickets stand before Rassie van der Dussen and JJ Smuts saw their side through.

England, batting first posted the total mostly on the back of a wonderful effort from Joe Denly, who hit 87 in only his second ODI. England slipped to 83/4, and later to a concerning 131 for 6 with Tabraiz Shamsi claiming 3/38 before Denly, with Chris Woakes, put England back on track with a crucial 91-run partnership. In reply, Bavuma and de Kock overshadowed England’s lower order fight back with a classic top order stand.

“We were way off the mark. South Africa completely outplayed us in every department,” admitted England captain Eoin Morgan. “Every batsman apart from Joe Denly and Chris Woakes struggled to get on. South Africa bowled well, they bowled accurately and used the conditions with slower balls. Then the partnership between De Kock and Bavuma we couldn’t penetrate.”

South Africa were moving cautiously scoring 25 in the first six overs, before Reeza Hendricks edged Woakes, who was playing his 100th ODI. That is when Bavuma and de Kock came together to stage South Africa’s best second-wicket partnership against England in ODIs. This was Bavuma’s third ODI with scores of 113 and 48 in the previous two and after forcing his way into the side for the 4th Test, the batsman fell two short of what would have been his second century.

De Kock was brilliant with his strokeplay. He smoked Tom Curran for a massive six and then thumped a scintillating cover drive to bring up 5000 ODI runs. He and Bavuma were in cruise mode before Joe Root bowled the South Africa skipper, who missed a slog sweep. With 61 needed off 89, Bavuma was trapped LBW by Chris Jordan, but der Dussen and Smuts downed the target with 14 balls left.

“It was a good night. It feels good to get back to winning ways. We had one or two chats about how we want to take this ODI team forward. Today was a good start – but it’s only one game,” said De Kock.

“We understood it was pretty difficult to hit boundaries. It was a matter of finding a way to get momentum and we understood that running hard between the wickets was the way to go about it.”