Iyer's century, couple by half-centuries from Virat Kohli and KL Rahul, allowed India to stitch century partnerships for the third and fourth wickets. Shreyas Iyer‘s promising New Zealand summer continued with the batsman registering his maiden international hundred, propelling India to a strong 347/5 in the first ODI in Hamilton on Wednesday. Iyer’s century, couple by half-centuries from Virat Kohli and KL Rahul, allowed India to stitch century partnerships for the third and fourth wickets after debutants Prithvi Shaw and Mayank Agarwal threw away promising starts.

Shaw and Agarwal, who started their Test careers in blazing fashion, had a chance to replicate the same in ODIs. After watchfully playing out the first three overs, boundaries began to flow with India’s newest opening pair brining up the team fifty in the seventh over. But their back-to-back dismissals got New Zealand right back in it. Hamish Bennett went for 26 in his three overs, and Colin de Grandhomme, replacing him, had Shaw poking outside off and nicking the ball to Tom Latham.

Five balls later, Mayank Agarwal lashed Tim Southee to Tom Blundell at point for the bowler to be rewarded for a wonderful first spell. Virat Kohli, who last scored an ODI hundred in August last year, put India back on track with a partnership of substance with Iyer 102 runs with the captain rotating strike. Kohli scored six crisp boundaries en route to a half-century before failing to read a googly from Ish Sodhi and getting bowled.

Iyer, initially scratchy, led a charmed life. He was dropped twice in a span of four balls Ross Taylor grassing a tough, diving chance at gully, and Southee getting his fingertips to an aerial shot next over. In the company of Rahul, Iyer found his confidence before both batsmen unleashed a flurry if boundaries. With Kohli perishing, Iyer brought up his seventh half-century before laying it into New Zealand’s bowlers.

Rahul continued his golden New Zealand summer with a half-century of his own. His back-to-back sixes off Ish Sodhi got India one short of 200 in the 35th over, with the next 50 runs taking 29 balls. With 10 overs left and India, having already crossed 250, opened the floodgates. Iyer was dropped a third time, de Grandhomme putting down a dolly running in from long-off, before scoring his 100th run. With the partnership reaching 136, he slapped Southee to Santner at deep cover.

Rahul and Jadhav sustained the momentum bringing up India’s 300 in the 44th over, setting laying the platform for one final lift. Kedar Jadhav announced himself with a 20-run over off Southee three fours and a six. Scoring at 200, he and Rahul combined to score 50 off 25 balls as India walloped 56 in the final five. That New Zealand gave away 19 wides didn’t help either. 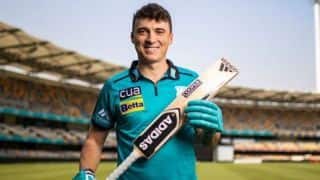