Taylor unleashed a relentless assault on arguably the best bowling attack in the world, and orchestrated New Zealand's highest successful chase in ODIs. Ross Taylor scored his 21st ODI century, and coupled with half-centuries from Henry Nicholls and Tom Latham, helped New Zealand overhaul India’s massive 347/8 to win the opening match of the ODI series in Hamilton on Wednesday. After thrice coming close to getting New Zealand over the line in T20Is, Taylor unleashed a relentless assault on arguably the best bowling attack in the world, and orchestrated New Zealand’s highest successful chase in ODIs.

Shreyas Iyer’s maiden ODI ton was the biggest takeaway of the Indian innings, which also saw half-centuries from KL Rahul and Virat Kohli. But as special as they were, Taylor came up with an equally scintillating knock, trumping Iyer’s career-best effort. Dropped on 12, Taylor cashed in on the opportunity on a wonderful batting deck and ensured this time, he saw New Zealand through.

The platform for the Taylor special was laid out by Martin Guptill and Nicholls’ opening stand of 85 inside 16 overs. Shardul Thakur snuffing out Guptill remained the only bright spot of his otherwise forgettable outing he gave 80 from nine overs. The same could be said for Kuldeep Yadav, who, after having Tom Blundell stumped cheaply, took a hammering and bled 84. India had to wait nine overs to get their third wicket, but by the time it arrived, Taylor and Latham had already put the match beyond conclusion.

It would take a brave mind to recollect the last time India’s bowlers received such a pasting. Sloppy ground-fielding and untimely no-balls didn’t help their cause either. New Zealand grabbed many big overs in between the 25th bowled by Kuldeep was taken for 15, which eased the pressure created by Ravindra Jadeja. India had a sniff when a remarkable direct hit from Kohli saw the back of Nicholls, but for the first time in their tour, India had no answer to contain Taylor.

Taylor stitched two crucial partnerships 62 with Nicholls, followed by a 138-run alliance with skipper Latham, which quite possibly proved to be a match-winning one. In fact, it was Latham’s reverse sweeps that opened the floodgates for both batsmen to capitalise his 49-ball knock included eight boundaries and two sixes, while Taylor brought out his leg side game and used to full effect. His strokes on the offside was equally breathtaking, taking Thakur for 20 runs before completing his century.

For a brief moment, it seemed likely as if the ghosts of the T20Is would strike New Zealand. With the wicket of Latham, New Zealand appeared to have choked again, albeit briefly when India sent back James Neesham and Colin de Grandhomme in a space of four balls. But with 13 needed off 17, Santner pulled Thakur over the ropes to ease nerves. In the end, Taylor scored the winning runs to snap their horror run.

Iyer’s century, couple by half-centuries from Kohli and Rahul, allowed India to stitch century partnerships for the third and fourth wickets after debutants Prithvi Shaw and Mayank Agarwal threw away promising starts.

Shaw and Agarwal, who started their Test careers in blazing fashion, had a chance to replicate the same in ODIs. After watchfully playing out the first three overs, boundaries began to flow with India’s newest opening pair bringing up the team fifty in the seventh over. But their back-to-back dismissals got New Zealand right back in it. Hamish Bennett went for 26 in his three overs, and Colin de Grandhomme, replacing him, had Shaw poking outside off and nicking the ball to Tom Latham.

Five balls later, Mayank Agarwal lashed Tim Southee to Tom Blundell at point for the bowler to be rewarded for a wonderful first spell. Virat Kohli, who last scored an ODI hundred in August last year, put India back on track with a partnership of substance with Iyer 102 runs with the captain rotating strike. Kohli scored six crisp boundaries en route to a half-century before failing to read a googly from Ish Sodhi and getting bowled.

Iyer, initially scratchy, led a charmed life. He was dropped twice in a span of four balls Ross Taylor grassing a tough, diving chance at gully, and Southee getting his fingertips to an aerial shot next over. In the company of Rahul, Iyer found his confidence before both batsmen unleashed a flurry if boundaries. With Kohli perishing, Iyer brought up his seventh half-century before laying it into New Zealand’s bowlers.

Rahul’s extended his unforgettable New Zealand tour with an entertaining fifty. His back-to-back sixes off Ish Sodhi got India one short of 200 in the 35th over, with the next 50 runs taking 29 balls. With 10 overs left and India, having already crossed 250, opened the floodgates. Iyer was dropped a third time, de Grandhomme putting down a dolly running in from long-off, before scoring his 100th run. With the partnership reaching 136, he slapped Southee to Santner at deep cover.

Rahul and Jadhav sustained the momentum bringing up India’s 300 in the 44th over, setting laying the platform for one final lift. Kedar Jadhav announced himself with a 20-run over off Southee three fours and a six. Scoring at 200, he and Rahul combined to score 50 off 25 balls as India walloped 56 in the final five. That New Zealand gave away 19 wides didn’t help either, but India were even poorer on that ground, conceding 24 runs erring in line. 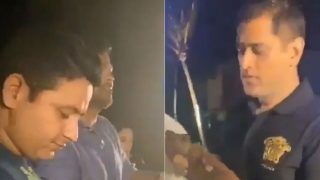