Australia are not in the best of forms as they get ready to take on a revved-up South Africa in the first ODI on Sunday.

On current form, Australia look a long way off from retaining the World Cup. With 16 losses in the last 18 ODIs, the five-time World Champions are not in the best of forms as they get ready to take on a revved-up South Africa in the first of the three one-day internationals in Perth on Sunday.

Australia haven t played much of the 50-overs format since they were drubbed 0-5 to England. In fact, of all the 10 ODIs they ve played all against England Australia have lost nine. And it doesn t get any easier from here onward either. Steve Smith and David Warner are massive voids to fill, and if their recent performances with the bat are any indications, Australia don t look even remotely close to finding decent options. Hopes are high from Aaron Finch, who has replaced Tim Paine as the man to lead the side, but he too will be aware of the mountain that lies ahead, considering Australia looks light years away from finding the right combination. They have just six months left to sort things out.

In a scenario as precarious as this, they gear up to face South Africa, and they might as well take a lot from it before the series against India begins later this month. The two teams have a rich history of producing classics and this short series shouldn t be an exception. That said, South Africa have problems of their own. They will be without star batsmen Hashim Amla and JP Duminy but have enough strength in the fast bowling department to trouble Australia on their soil. A returning Dale Steyn, who might be playing in Australia for the last time, said he expects a competitive clash and Australia would hope for nothing less.

Weather: Mostly sunny with a high of 30 degrees Celsius

There were doubts regarding Finch s participation after taking a stingy blow to his finger while batting during practice, but the Australian captain has survived the scare and will feature. So will Mitchell Starc, who has recovered from the hamstring injury. Josh Hazlewood and Pat Cummins is set to make his much-awaited return to international cricket, and while the surface at Perth promises to generate bounce, they might just include legspinner Adam Zampa alongside three fast bowlers.

South Africa may have lost the game against the Prime Minister s XI but are likely to stick to the same Playing XI. South Africa captain Faf du Plessis might be tempted to play two spinners depending on the surface but its chances look slim.

– Australia have lost 16 of their last 18 one-day internationals.

– Imran Tahir is one shy of recording 150 ODI wickets.

“If you start looking at the end result purely that’s when you can make some errors in judgement and fall down that way. It’s just important to keep it nice and positive and follow our processes as opposed to the full outcome.” – Australia captain Aaron Finch on moving past their performance in 2018.

“Whenever you get a chance to play against Australia it feels like you’re playing against a very good cricket team.” – South Africa captain Faf du Plessis on the competitiveness of the series. 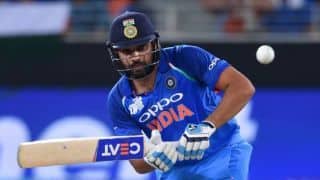