Australia could field as many as four debutants come Sunday, which would make it the first such instance in 40 years.

Pakistan will look to extend their supremacy in Test cricket in the UAE when they meet a new-look Australia – entering a fresh era under Tim Paine and Justin Langer, and with many new faces – when the first of two matches gets underway in Dubai on Sunday.

Since the UAE became their home away from home in 2009 following the terrorist attack on the touring Sri Lankan team, Pakistan have lost just one Test series in the country – to Sri Lanka 0-2 in September 2017. Of the others, five have been won and four drawn. It is a proud record that Sarfraz Ahmed s team will hope to extend against an Australia side attempting to emerge from the shadows of the ball-tampering controversy that engulfed it when they last played Test cricket in April.

Pakistan have kept their cards close to their chests, with no word from the camp until Friday when Sarfraz addressed the media and singled out Yasir Shah, who will play his first Test in a year, as his strike force. With Shadab Khan all but ruled out, Pakistan need Yasir to get back to his best. The Pakistan A squad for the four-day draw with Australia at the ICC Academy in Dubai did not include a single specialist spinner, with the Test regular Asad Shafiq bowling 33 overs in the tourist s innings of 494/4 declared. Come the first Test, however, and a new-look Australian batting line-up can expect a stiff examination.

Their head coach Justin Langer has stressed on the focus to win back the faith of the Australian public, but he and Paine know full well the difficulties of succeeding in Asia – where Australia have not won a Test series since 2011. Australia could field as many as four debutants come Sunday, with three spots up for grabs given the bans on Steve Smith, David Warner and Cameron Bancroft and injuries to Josh Hazlewood and Pat Cummins.

The last time Australia played Tests in the UAE was 2014, when Pakistan won 2-0.

In Shadab s absence – he is out with a groin injury – Pakistan can call on the uncapped 33-year-old offspinner Bilal Asif who last played an ODI in 2015. In the middle order, Usman Salahuddin is likely to lose his place to Mohammad Hafeez, who has not played Tests since 2016, given that his action has been cleared. Hafeez s offspin will be valued against an Australian line-up with three left-hand batsman.

Pairing Mohammad Abbas – who won Pakistan a Test in England in May – with the new ball should be one of Hasan Ali or the uncapped left-arm quick Mir Hamza, given that Wahab Riaz went wicketless in the practice match with Australia. Riaz last featured in a Test in October 2017.

Pakistan will slot Babar Azam back at one-down, in place of Haris Sohail who batted at that position in their last Test in June. Azam was on 68 when he was struck on the forearm by Ben Stokes and retired hurt, with scans revealing a fracture. He returned for the limited-overs tour of Zimbabwe and played through the recent Asia Cup.

Fakhar Zaman s poor run in the Asia Cup could have scuppered his chances of a Test debut. The pair of Imam-ul-Haq and Azhar Ali will in all likelihood be the openers.

Aaron Finch and Travis Head have all but been confirmed for their Test debuts, and could be joined by the uncapped Queensland pair of Michael Neser and Marnus Labuschagne. Neser, 28, could edge out the recalled Peter Siddle who did not bowl in the four-day match with Pakistan A. And with Matt Renshaw s participation in doubt following his blow to the head while fielding, Labuschange could slot in alongside Finch at the top of the order.

If these four make their debuts, it will be the first time in over four decades that Australia have fielded four debutants in a Test.

Three spinners looks unlikely, with Mitchell Starc and one of Neser and Siddle backed by Nathan Lyon and Jon Holland, who claimed five wickets in Pakistan A s second innings in Dubai. Mitchell Marsh bowled just 12 overs in that game, and should not be expected to bowl a lot of overs given he recently resumed turning his arm over.

– Finch has scored 4957 runs for Australia in limited-overs cricket without earning a Baggy Green, which stands as the record for most international runs scored without playing Test cricket.

– Yasir is 12th on Pakistan s all-time bowling charts, and if he takes 14 wickets in the series he will jump to eighth.

– Yasir, Hafeez and Zulfiqar Babar combined to claim 30 of the 40 Australian wickets that fell in the 2014 Test series.

Yasir is our main bowler so we want him to attack and get us wickets to win the series. – Sarfraz

We ve faced a hell of a lot of spin, there s no doubt about that and Australian touring sides always do. We re going to have to take everything we ve been working on. – Paine 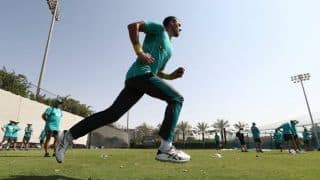 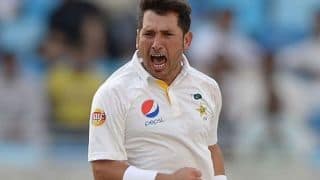