Indian cricket went through another disheartening year both on and off the field, starting with the national side failing to defend its World Cup title.

Mumbai: Indian cricket went through another disheartening year both on and off the field, starting with the national side failing to defend its World Cup title to Indian Premier League (IPL) sides Chennai Super Kings (CSK) and Rajasthan Royals (RR) being suspended by the Supreme Court-appointed Justice Lodha Committee in the spot fixing and betting scandal. Co-hosts India who had won the World title after 28 years in 2011 under the leadership of Mahendra Singh Dhoni, failed to defend it in March 2015, as the visitors went down to Australia in the semi-finals by a big margin. Co-hosts Australia went on to clinch their fifth World title beating New Zealand. Gurkeerat Singh looks forward for the Australia Tour 2016

More than the Cup loss that shook the sport in the country was when the cash-rich Twenty20 tournament saw a new low with its star-studded teams being suspended for two years. Both franchise’s officials and co-owner Gurunath Meiyappan and Raj Kundra, both of whom were earlier found guilty of betting, were suspended for life from any cricketing activity undertaken by the Board of Control for Cricket in India (BCCI).

Following the suspension, the game’s governing body in the country had to bring in two new teams (Pune and Rajkot) for the tournament to make it a competitive one. Besides controversies surrounding the game off the field in the country, the national team’s on-field performance too began on a wrong note at the start of the year with India somehow managing a draw against hosts Australia in fourth and final Test, eventually losing the series 0-2. Ajinkya Rahane is India s team man, suggest VVS Laxman, Kapil Dev

This was soon followed by a dismal show in the tri-series involving England and hosts Australia where the Dhoni-led side failed to win a single match. The loss was followed by heartbreak for millions back home as two-time World Cup winners failed to defend their title on foreign soil. Next up was the flamboyant T20 league in the country which paved the way for both fans and players to start afresh. Mumbai Indians clinched their second IPL crown beating CSK at the iconic Eden Gardens.

But the Indian team’s misery continued as they went down to a well organised hosts Bangladesh 1-2 in the ODI series after drawing the lone Test. Next it was a chance for the youngsters to prove a point as the team flew to Zimbabwe for three-match ODI series where they won all three and managed to win one and lost one in T20 encounter. India then toured Sri Lanka for a three-match Test series where the visitors came out victories 2-1. West Indies could complete abandoned 2014 tour of India: WICB

It was followed by over two-month-long South Africa tour of India which started on a disappointing note as the hosts lost both the T20 and ODI series. The longest format of the game was left to restore some pride and the four-match Test series saw India make the best use of the home conditions, by producing rank turners to outplay the Proteas 3-0 in style. The pitch in Nagpur was the centre of all controversies, as critics across the globe hit back at India for producing such unplayable conditions.

Swashbuckling batsman Yuvraj Singh made a comeback to the Indian team after more than a year when he was named in the Indian T20 squad for the limited-overs series in Australia next month. The left-hander returned to national reckoning thanks to a series of impressive performances in the Vijay Hazare trophy, including a scintillating 83-ball 98 against Services which helped Punjab qualify for the knockout stages of the tournament. India-Pakistan cricket can only resume next year, says Shahryar Khan

The country saw plenty of controversies off the field during the year, with the acrimonious relationship between India and Pakistan resulting in the proposed bilateral series being cancelled. The BCCI and the Pakistan Cricket Board (PCB) had signed an MoU last year, agreeing to play a total of six bilateral series between 2015 and 2023. The first of these were to be hosted by the PCB in the United Arab Emirates (UAE) in December.

But with BCCI president Shashank Manohar reluctant to play in the UAE, the PCB agreed to host a limited-overs series in Sri Lanka. The BCCI asked the Indian government to play the series. But the government did not come up with a decision, which ultimately led to the series being cancelled. Allegations of corruption within the Delhi and Districts Cricket Association (DDCA) also created a storm with the Delhi government launching a probe into the body’s financial affairs.

The ruling Aam Admi Party (AAP) accused former DDCA president Arun Jaitley of overseeing massive financial irregularities during his 13-year tenure which ended in 2013 and demanded his resignation as Union Finance Minister. Former India player Kirti Azad also held a press meet where he alleged that the DDCA gave contracts to fake companies, paying them crores of rupees in cash and had fudged the audit of accounts.

He also played a video produced by WikiLeaks4India which claimed that some of the companies favoured by the DDCA had given fictitious addresses. Addressing the media with former India captain Bishan Singh Bedi, Azad sought an investigation by the Enforcement Directorate into the working of the DDCA. The row led Jaitley to file a defamation suit in the Delhi High Court against Chief Minister Arvind Kejriwal and five other AAP leaders, seeking Rs.10 crore in damages.

Above all, the keeping aside of all controversies surrounding the game, history was made in the world of cricket when for the first time in the international level a day and night Test match was played between hosts Australia and New Zealand with the help of pink ball in Adelaide in November. Thousands turned up to witness the game take giant steps to the next level. The year also saw Australia speedster Mitchell Johnson retire from the game after a successful 10-year-long career. Johnson, the country’s fourth highest Test wicket-taker finished his career with 313 Test wickets behind only Dennis Lillee (355), Glenn McGrath (563) and Shane Warne (708) on the list of Australia’s greatest wicket-takers. 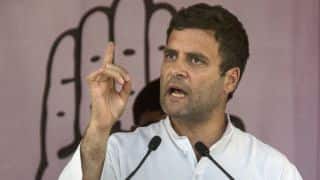