The ICC on Friday named the list of 22 match officials for the league stage of the 2019 ICC Cricket World Cup in England, where 16 umpires and six match referees will be on duty for the tournament that spans 48 days.

The World Cup starts on May 30 and ends on July 14. For the tournament opener at The Oval between hosts England and South Africa, David Boon has been chosen as match referee, Kumar Dharmasena and Bruce Oxenford the on-field umpires, Paul Reiffel the third umpire and Joel Wilson the fourth official.

“Officiating at the World Cup as with playing, is an honour and the pinnacle of an official s career,” said the former West Indies opener Adrian Griffith, now the ICC Senior Manager Umpires and Referees. “It is a tough job with the eyes of the cricketing world on every decision, but this group of 22 is the very best from around the world who will rise to the occasion. I wish them all the very best.”

For former Sri Lanka cricketer Madugalle, the most experienced match referee, this is his sixth World Cup. Pakistan umpire Dar will officiate in his fifth World Cup while for Broad and Crowe, it will be their fourth.

The former England World Cup wicketkeeper Gould will retire after the tournament, which is his fourth World Cup.

“Ian has made an outstanding contribution to the game over a long period, particularly in the last decade as an international umpire for the ICC,” said ICC General Manager Cricket, Geoff Allardice. “He has always put the interests of the game first, and in doing so has earned enormous respect from his colleagues and players across all countries. His presence on the field will be missed, but I am sure his lifelong association with the game will continue.:

The appointments for the World Cup semi-finals will be announced at the end of the league stage and those for the final will be finalised after the semi-finals. 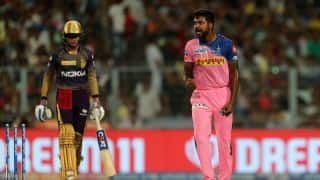 Chennai Super Kings vs Mumbai Indians, IPL 2019, LIVE streaming: Teams, time in IST and where to watch on TV and online in India