Hales has been in an out of England's ODI team since he was sanctioned for his involvement in a brawl.

England batsman Alex Hales has made peace with the fact that his Test career is over, and now he wants to channel his efforts into being the best white-ball player he can possibly be with the focus being the 2019 ICC Cricket World Cup.

Hales, 30, has been in an out of England’s ODI team since he was sanctioned for his involvement in a late night brawl in Bristol in 2017. Once the ban was lifted, Hales returned but has played just 17 ODIs since.

Hopeful of making England’s World Cup squad, Hales told The Guardian that he was confident of being “truly world-class” in white-ball cricket.

“I think there are only a handful of players who can be truly world-class at all three formats and having played all three, I’m not one of them. But I think I can be in white-ball,” he said. (READ: England need to perform under pressure to win the World Cup: Alex Hales)

Hales has had to watch from the sidelines as Jason Roy and Jonny Bairstow have formed England’s preferred openers in ODIs, which he admitted was tough.

“I won’t lie, there have been days when it has gnawed away at me. The fines and everything were a dent, but the biggest thing was losing my spot,” said Hales.

“The day I found out I wasn’t playing (in the final two ODIs against Windies) I knew Jason would come in and score big runs. He’s too good a player. And Jonny was in the best form of his life. I saw it coming and it unfolded in slow motion. Sometimes I make mediocre decisions – I always have – but I don’t want to make them any more. It takes 10 seconds to get an image and 10 years to undo it. I’m 30 now, not 20, and I’ll be doing whatever I can for the rest of my career to change perceptions.”

With an average of 37.46 and strike-rate of 92.73 since he was recalled to the squad in early 2018 the Nottinghamshire opener knows that he has what it takes to deliver in ODIs, and is determined to make his chances count.

“The last year-and-a-half, there have been ups and a hell of a lot of downs. All I will be focusing on is cricket,” said Hales. “It’s the biggest year in English cricket history. I will be doing everything I can to be the best I can. It’s been so special being in this England team and when you lose your spot, you realise it.” 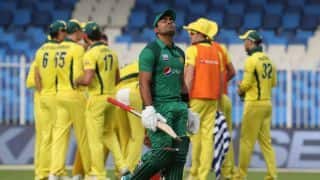