Finch predicted that his one-time opening partner will return to international cricket with a bang.

David Warner has been earmarked for a successful 2019 ICC Cricket World Cup by his Australia captain, Aaron Finch, who feels that the batsman will play with “huge hunger” on his return to international cricket after a 12-month ban.

During his comeback to the IPL after serving his sentence for ball-tampering in South Africa last year, Warner amassed 692 runs from 12 matches at an average of 69.2 and strike-rate of 143.86 for Sunrisers Hyderabad before returning home.

Finch was not part of the IPL but predicted that his one-time opening partner will return to international cricket with a vengeance.

“I think he (Warner) is coming back with a huge hunger, not just to perform well for his (IPL) franchise and things like that but to dominate international cricket again,” Finch told Melbourne radio station SEN. “When you have your dream taken away from you for 12 months, there would be something deep inside you that burns really strongly.

(READ: David Warner would have been a better captain than Steve Smith: Ian Chappell)

“He s a super player and we know how destructive he can be. I think having that time off to spend with his family and get away from the game yeah it was unfortunate and they served their ban and they re back. But it is such an important time for everyone to embrace that and embrace them coming back into the culture.”

Warner s 81 off 56 balls in Sunrisers’ big win over Kings XI Punjab was his ninth 50-plus score of the season. He left the IPL as the leading run-getter, 172 ahead of KL Rahul at second place.

Finch and Warner could be reunited at the top of Australia’s batting order at the World Cup, a prospect which enthused the skipper.

“We ve had some great partnerships over the years and we ve known each other for 16-17 years so we re great friends,” Finch said. “To bat with someone that you re comfortable with off the field is just as important as on the field because you get to know people s moods and mannerisms and what they re thinking – not even by talking, but just sensing it and being with them.

“Having those really close bonds out in the middle is really important because you can sense someone building up to a big shot or taking an unnecessary risk. He can sense when I m doing that, so it s a chance to calm me down, and vice versa.”

The Australian team is headed to Brisbane for a pre-World Cup training camp. They open their World Cup campaign against England on May 30. 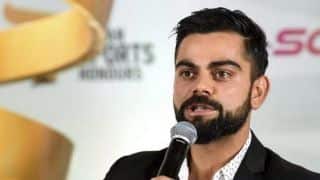