Not only did the Indian captain smash Sachin Tendulkar’s record to become the fastest batsman to the mark, Kohli registered his 37th ODI century to drive India to 321 for 6.

The second ODI was always going to be about Virat Kohli’s 10000th ODI run. As it turned out, not only did the Indian captain smash Sachin Tendulkar’s record to become the fastest batsman to the mark, Kohli registered his 37th ODI century to drive India to 321 for 6. Ambati Rayudu aided Kohli in a 139-run partnership for India’s third wicket, but once he departed, Kohli (157*) produced another masterclass at a venue where he simply loves to score.

During his innings, Kohli conquered a couple of more impressive feats. He overtook Tendulkar (1573 runs) to become the leading run-scorer for India against West Indies in ODIs and became the fastest to score 4000 by a batsman at home. At Vizag, Kohli continue from where he’d left off at Guwahati. Receiving a reprieve at 44 by his compatriot Jason Holder , failing to hold on to a skier running backwards at long-on, Kohli punished West Indies en route to a century off 106 deliveries.

The other century from the previous night in Guwahati, Rohit Sharma scored a boundary before falling to Kemar Roach. Shikhar Dhawan and Kohli then took India forward with the left-hander seeming to get into his elements. Dhawan struck four boundaries and a six for his 30-ball 29 before getting out leg-before to Ashley Nurse.

Rayudu, the man who Kohli had shown support to cement himself as India’s No. 4, made the most of his captain’s call. He came in at the fall of Dhawan’s wicket, just when the left-hander seemed to be getting in his elements with four boundaries and a six, and got his eye in. He began with a crisp cover drive and scored four boundaries in nine deliveries between overs 26 and 28. He reached his ninth ODI fifty off 61 deliveries and under his partnership with Kohli, India were flourishing. A third ODI was in sight but 27 short of it, he missed a slog sweep and was bowled giving Nurse his second wicket.

With a push towards long-on, Kohli became the fifth Indian and 13th overall to enter the prestigious 10K club. But as the euphoria surrounding it settled, West Indies get two quick wickets to clay their way back. Debutant Obey McCoy, returning for his second spell after spraining his right arm earlier in the innings, foxed MS Dhoni with a slower one, Marlon Samuels ended Rishabh Pant’s debut innings in ODIs on 17.

With six overs to go, the way Kohli switched gears was phenomenal. Shortly after he brought up his 1000th run this calendar year, making him the quickest in terms of innings (11), Kohli smoked Kemar Roach deep into the crowd at long-on. Two balls later, McCoy’s length ball was muscled into the second tier at cow corner. Then came West Indies’ quickest Roach, who was taken for a six and a four off two deliveries. Another boundary, off the last ball of the over, brought up India’s 300. The next two overs fetched India 21 runs but by then, with Kohli bringing up his fourth 150-plus score in ODIs. 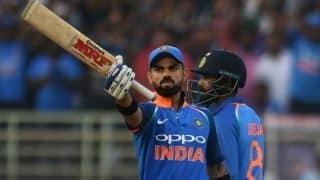 2nd ODI: Records set by a rampaging Virat Kohli during his 157* vs West Indies