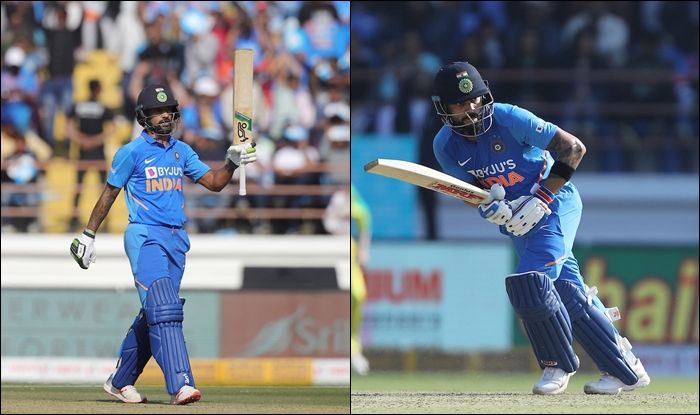 Faced with the task of levelling the series, India brought out the big bats with Shikhar Dhawan, Virat Kohli and KL Rahul scoring half-centuries to lift the team to a formidable 340/6 against Australia at the SCA Stadium in Rajkot. Dhawan and Kohli added 103 runs for the second wicket before Australia seemingly punctured the chase with three quick wickets in the middle overs, but Rahul batted belligerently in the final five overs to power India in the final five overs.

With the projected score hovering around 350, India knew they had to get a big one in Rajkot to force the series into the decider. Dhawan and Rohit Sharma were quick to get off the blocks, raising India’s 50 inside nine overs. After the first over bowled by Pat Cummins was a maiden, both openers got off the mark with a boundary and scored at a brisk pace.

Runs came at a decent clip for India with Rohit and Dhawan looking in great touch. Kane Richardson’s first over fetched them seven runs including a boundary to Rohit. Cummins, who changed ends, replacing Mitchell Starc, had given two off his first five deliveries before Dhawan smacked one half-volley for his fourth four of the innings.

The platform was laid for Rohit to take off put Adam Zampa ensured Australia got a breakthrough instead when he trapped the batsman missing a sweep and being given out leg before, the review not helping. At the fall of the first wicket, it was Kohli who walked out and began with a sumptuous drive for his first boundary. Kohli attained further momentum scoring back-to-back boundaries off Ashton Agar.

On the other end, Dhawan ensured India never lost out on boundaries and brought up a second consecutive half-century off 66 balls having struck six fours. With two spinners operating in tandem in Ashton Agar and Marnus Labuschagne, Dhawan gave the left-arm spinner a severe beating with a six and a boundary. A hundred seemed on the cards but Dhawan pulled Starc to Richardson at deep square leg to depart four short.

Kohli completed his half-century but Australia hit back with the wickets of Shreyas Iyer and Manish Pandey in quick succession. Adam Zampa, who had dismissed Kohli four times in ODIs before this, got the Indian captain on the fifth instance when Kohli skied a delivery for a brilliant piece of work from Agar and Starc down at the boundary. Agar collected the ball and lobbed it for Starc to complete the catch as momentum took the left-arm spinner over the boundary.

Rahul gave India the impetus they needed toward the end. He belted Agar down the ground for a six before Starc was dispatched for a boundary and a six. The attack continued even after Rahul got to his fifty off just 38 balls. Off the last over, India were penalised five runs for repeatedly running on the pitch alongside losing Rahul’s wicket, run out by a direct hit from wicketkeeper Alex Carey 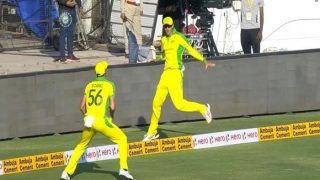 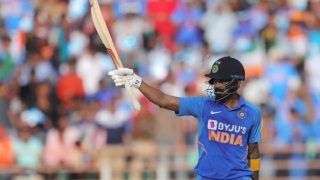