India would like to be pushed ahead of the tour of Australia, and test out the likes of Rishabh Pant in the middle order.

How do you bounce back from scoring 322 and losing by eight wickets with 47 deliveries to spare? That is the predicament facing West Indies as they seek to prevent India from a fourth successive win on tour when the teams meet in Visakhapatnam on Wednesday for the second ODI.

After losing by huge margins in the Test, West Indies were expected to be more competitive in the 50-over formats but instead were smashed in the first ODI. A dominant 78-ball 106 from Shimron Hetmyer helped West Indies to 322/8 after they were asked to bat, but that target was made to look 80 runs short as Virat Kohli and Rohit Sharma put on 246 for the second wicket with a pair of stunning hundreds.

Jason Holder was pleased with his team s batting, and felt they could improve in the second ODI. But it will take something extraordinary to stop them at a venue at which Kohli has amassed 647 runs in five international innings, including a sequence of 118, 117, 99 and 65 in four ODIs. Holder and his pace-bowling unit will have to bowl better lengths, and while Hetmyer s century proved a much-needed highlight for West Indies, getting a batsman of Marlon Samuels experience scoring runs will help.

India would like to be pushed ahead of the tour of Australia, and test out the likes of Rishabh Pant in the middle order.

Weather: Mostly sunny with a high of 32 degrees

India didn t get a chance to test out Pant on his debut, but he should hold his place. Mohammed Shami s return to ODIs saw him concede 81 runs and he could be benched for Kuldeep Yadav. This is a venue that has favoured spin.

Oshane Thomas was taken for 83 runs in nine overs after an early wicket, underlining why raw pace amounts to little if you don t hit the right areas. His place could be taken by Keemo Paul. The offspinner Ashley Nurse went for 63 in seven, and may also be dropped.

– India have won six of seven ODIs at Visakhapatnam. Their only loss there came to West Indies by two wickets in 2013.

– Kohli is 81 runs short of becoming the fifth Indian batsman to score 10,000 runs in ODIs.

Really pleased for Hetmyer, especially after the Test series. He showed great character to comeback strongly, he said. We could have got a bit more had he carried on for five-six more overs, but this is a young team and we will learn. Hopefully we can play a lot better in the second game. – Holder

It s never too difficult when you have Rohit at the other end. – Kohli 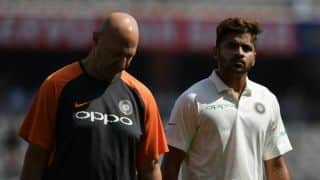