Bangladesh marked their USA debut by beating West Indies by 12 runs in the second Twenty20 international at the Central Broward Regional Stadium in Lauderhill, Florida on Sunday, thus setting up the deciding match.

Defending 171 after sparkling fifties to Tamim Iqbal and Shakib Al Hasan, Bangladesh took wickets regularly to check a stumbling West Indies chase, which featured only two significant scores from Andre Fletcher and Rovman Powell who each made 43.

West Indies chase began on a poor note with Evin Lewis (1) out lbw to Mustafizur Rahman in the second over, while the decision promote Andre Russell to No 3 did not benefit much as the allrounder made 17 off 10 balls before falling to Mustafizur. Marlon Samuels (10) and Denesh Ramdin (10) were dismissed by Shakib Al Hasan and Rubel Hossain, and at 58/4 in 7.1 overs the chase was floundering.

Andre Fletcher s 43 off 38 balls helped steer the innings, but his dismissal in the 15th over was followed by Carlos Braithwate (11) falling two overs later. The credit went to a stunning boundary catch from Liton Das, who ran around from deep midwicket to cow corner and held onto the ball even while avoiding a collision with the man coming in from long-on. Braithwate was Shakib s second wicket, giving Bangladesh s captain excellent figures of 2/19 in four overs.

Moments later, Shakib was guilty of dropping Powell on 37, a simple catch out down in the overs off Rubel Hossain. Powell had already clubbed two sixes to keep West Indies in the chase, and when he cracked Mustafizur for four off the second ball of the 19th over it looked like he would take them home. However, the bowler had his revenge next ball when Powell nicked to Mushfiqur.

Ashley Nurse swatted the next two balls for six and four to give Mustafizur somewhat bruising figures of 3/50, and that left West Indies to get 15 from the last over with three wickets in hand. Nazmul Hossain bowled a very fine over, conceding just three while removing Nurse and Keemo Paul. He finished with 3/28 in four overs.

Earlier, fifties to Tamim (74 off 44 balls) and Shakib (60 off 38) helped Bangladesh post 171/5 after Shakib opted to bat. Bangladesh had slipped to 24/2 with the offspinner Nurse taking the wickets of Das (1) and Mushfiqur (4) inside four overs, and when Soumya Sarkar s sluggish 14 off 18 balls came to an end, Bangladesh were 48/3 in the eighth over.

A partnership of 90 in 50 balls followed between Tamim and Shakib, who all through Bangladesh s tour of the West Indies have been the main contributors.

Tamim was dropped by Braithwate off Powell when on 47, and used the life to slam 22 runs off Russell s third over. The left-hander struck six fours and four sixes. Shakib s fifty featured nine fours and one six and he was last out in the 20th over, giving Paul his second wicket. 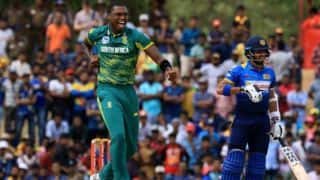