After a low-scoring affair in the 1st T20I at the Eden Gardens, India and West Indies are set for another tricky track at the debuting Ekana International Cricket Stadium, Lucknow on Tuesday.

After a low-scoring affair in the 1st T20I at the Eden Gardens, India and West Indies are set for another tricky track at the debuting Ekana International Cricket Stadium, Lucknow on Tuesday.

West Indies top-order failed to get going scoring just 109 runs in the 20 overs, courtesy Kuldeep Yadav’s 3/13 in four and tidy bowling from debutant Krunal Pandya and Khaleel Ahmed. However, the Carlos Brathwaite-led young West Indian unit managed to pull things back, even leaving India reeling at 45/4 at one stage.

India will expect a good fight from West Indies, while the visitors will be hoping to for the top-order to fire on a track that the local curator described thus, “and the batsmen will have to do a lot of running”.

Weather: Cool with with a high of 28 degrees

After a dream debut from Krunal in which he returned 4-0-16-1 and scored the winning runs in his nine-ball 21-run knock, the elder Pandya has sealed his place for the reminder of the series. Manish Pandey batting at number scored a handy 19 off 24 balls but would have loved to finish the game with Dinesh Karthik. However, it is unlikely that the Karnataka skipper will be replaced in the 2nd ODI. India would be aiming to wrap the series before trying out Shahbaz Nadeem. However, Umesh Yadav, who gave away 36 runs his his four overs may be benched in favor of Bhuvneshwar Kumar.

The West Indies handed out three debuts in the 1st T20I ,but they don’t have much to pick from the squad, so there are likely to play with the same ZI, but with a rejigged batting order. Rowman Powell played the entire ODI series and opening T20I match, but his returns have been meagre. 20-year-old Sherfane Rutherford could be handed a debut as the lower-order hitter replacing Powell. Rutherford scored 171 runs in eight matches at a healthy strike rate of 142.50.

In bowling, West Indies did really well with tearaway pacer Oshane Thomas rattling Indian openers Rohit Sharma and Shikhar Dhawan, with deliveries that Karthik described as special. He finished with 4-0-21-2 and will be a big threat to India.

Lucknow will host an international match for the first time in 24 years since 1994 when India played Sri Lanka in a Test, which India won by 119 runs

“The outfield is perfect and fast, but dew is definitely going to play a big part. The winter is setting in North India now and dew is going to play a big role from the first ball. So, the ball won’t be racing towards the boundary and the batsmen will have to do a lot of running,” curator, Ekana International Cricket Stadium. 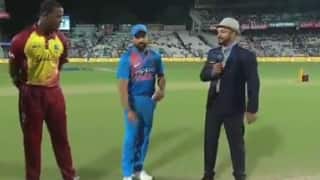 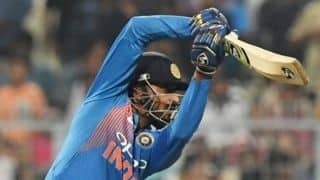