India reached 77/1 at lunch despite losing Rohit Sharma early on the opening day of the second Test against South Africa.

Opener Mayank Agarwal hit seven boundaries in his unbeaten 34 as India made a solid start by reaching 77/1 at lunch despite losing Rohit Sharma early on the opening day of the second Test against South Africa. Giving Agarwal (34) company was Cheteshwar Pujara on 19 after being dropped on zero off Kagiso Rabada’s bowling. The duo added 52 runs for the unbroken second wicket stand.

The South Africa bowlers hit good lengths during the first session, especially Rabada (1/26 in 10 overs), who got first Test hero Rohit out for 14. Rabada bowled a beautiful delivery that pitched on length and moved only a shade to take the outside edge of Rohit’s bat before going into wicketkeeper Quinton de Kock’s gloves.

Rabada’s first spell was a probing one and he was unlucky to miss out on a second wicket of Pujara when Temba Bavuma, at short leg, missed a reflex catch. The batsman was yet to get off the mark. Agarwal played smartly and waited for the third seamer, rookie Anrich Nortje (1/27 in 5 overs), to be introduced into the attack.

Nortje was clearly the fastest among the trio of pacers, and Agarwal started with a streaky boundary between the slips but soon got into the groove with a number of boundaries through the off-side. Nortje, with his pace, bowled fuller deliveries at a drivable length outside off stump.

In one of his overs, Agarwal hit an off-drive followed by two cover drives. Pujara began on a cautious note and it was only after left-arm spinner Keshav Maharaj was brought into the attack, the Saurashtra right-hander upped the tempo. In Maharaj’s very first over, Pujara used his feet to strike two elegant on-drives. A third on-drive also came along off Rabada’s bowling as the Indian duo completed a 50-run partnership. 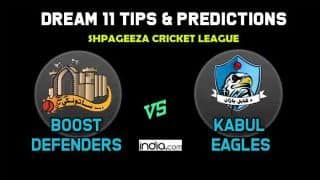